There’s a moment – spoiler alert – in Isabelle Farah’s show, Irresponsabelle, where she asks the audience to look under their seats, find a bag labelled ‘dignity’ and open it to see if there is anything left inside.

You’re likely nodding along; dignity-gone-rogue is a stomach lurch we’ve all experienced at some point in our lives (hangovers). But Isabelle, 36, sees the humour. “There is such an Insta-perfect life out there: ‘Oh look at this delicious meal I ate out with my husband’,” she eye-rolls. “My nights out still end by falling over.”

When she shared one such incident on her Instagram Stories, Isabelle received an outpouring of tales of collective clumsiness. Tipsy yoga that led to a broken nose. One person who was so desperate for the loo that they accidentally knocked themselves out on the bathroom door. “I thought, why is no one putting this content out there? We all do stupid stuff. There is joy in sharing mistakes,” she smiles.

Alongside a sunshine-warm personality and a penchant for an extrovert overshare, this is Isabelle’s trademark: delving into topics that affect us all, but which we don’t openly discuss.

Her debut show at last year’s Fringe, Ellipsis, was a powerful – albeit darker – introduction. Isabelle wrote it under emotionally wrought circumstances – grappling to process the suicide of her cousin, Jen, in 2017. What starts out as comedy segues into a raw account of what it’s like to stand on stage and tell jokes while simultaneously being floored by grief off stage.

By confronting humankind’s reluctance to speak about grief, Ellipsis ironically got people talking – namely, critics. They loved it. As four-star reviews poured in, Fringe organisers increased capacity in Isabelle’s venue from 80 seats, to 100, then 146. They all sold out. Chortle, an industry publication, named Ellipsis one of the best shows of 2021. 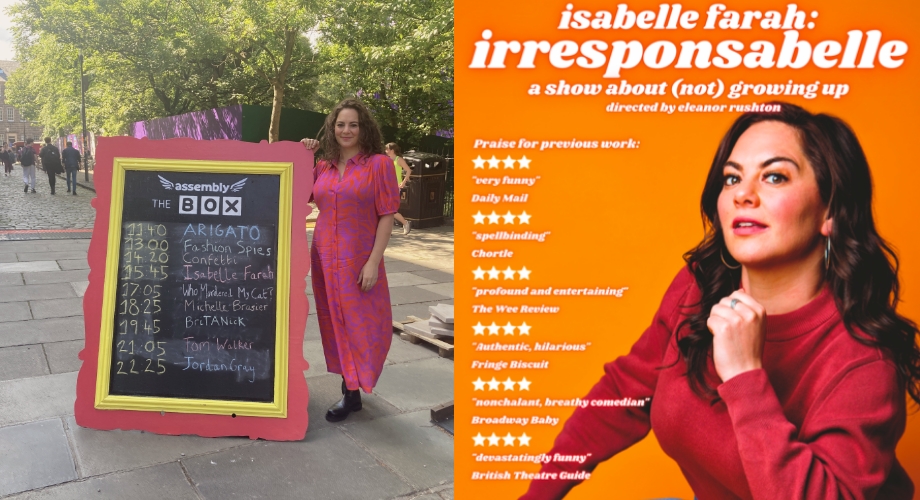 This year, Isabelle will perform Ellipsis and Irresponsabelle. Each show works as a standalone gig, but Isabelle hopes people will treat them as a two-course meal. Ellipsis as the heavy main course – rich in pathos and behind-the-scenes insight into how she constructs jokes. Irresponsabelle is the light dessert with a cheeky limoncello chaser.

A thread throughout both is theatre; Isabelle isn’t a joke-teller, she’s a performer. Trained as a classical actress, she initially had no interest in being a comedian.

“I wanted to be a serious actress – Shakespeare, big films – that was my dream. I came out of drama school and was like, ‘When’s Spielberg calling me?’” While she waited, Isabelle began temping. “I thought I’d work in an office for maybe two weeks before the RSC called me. What I actually did was a lot of temping,” she laughs, self-deprecatorily.

Temporary jobs turned into serious day jobs – four years at American Express, then ClassPass. With only evenings free, but still desperate to perform, Isabelle started doing stand-up gigs. Initially, once a week, then five nights. She wrote Ellipsis and set the goal of performing it at the Fringe 2020.

Isabelle contemplated giving up, questioning whether there would even be a performance industry to return to. But whenever lockdown restrictions lifted, she hit the comedy circuit. A fortnight before the 2021 Fringe was due to start, Isabelle got Ellipsis on the line-up.

“It was absolutely mad,” she says. “I did the Fringe, got four-star reviews, then came back to London and temped at a hedge fund where I had to order pens. It’s funny as industry people ask me where I suddenly came from? Suddenly? I’ve been grafting for years.”

A graft not helped by those short-sighted notions that women aren’t as funny as men. “An older male comedian recently asked a female friend why she doesn’t wear nice dresses on stage. I’m still, frequently, the only woman on the bill.”

But Isabelle spins her minority billing status into an opportunity to connect. “Female culture in the 21st century is a really universal, relatable experience,” she enthuses. “I joke about not knowing what retinol is or how to pronounce hyaluronic acid. I talk about crystals, dating, when in the month you are least likely to get pregnant or whether I can freeze my eggs by wearing a short skirt in winter.”

Isabelle isn’t worried if she loses half the room by going there. “It’s no different to a male comedian making a really good joke about cricket. There’s a beautiful acceptance in knowing you can’t be universally liked.” Today, Isabelle boasts multi-hyphenate job titles – actress, TV star (most recently in Doctors), writer, voiceover artist – but it’s comedy that’s taught her the biggest life lesson.

“That failure isn’t final,” she shares. “If a joke doesn’t work the first time, I go home and rework it. Maybe it was the delivery? The speed? Failing, really, is just another word for honing. "There she goes again – putting a positive spin on a topic we feel squeamish talking about. Her show may be Irresponsabelle, but something tells us she’s about to be Unstoppabelle, too.