It looks like you're visiting from country. Please click here to continue shopping.
Our summer sale is here | Up to 50% off Writer, horsewoman, mother-of-five – Clover Stroud is a remarkable woman and so is her beautiful, honest memoir of love and tragedy, The Wild Other. It begins with the abrupt end of her unconventional, idyllic childhood, when her beloved mother is left severely brain-damaged by a riding accident. It follows Clover’s wild, romantic, at times dangerous, journey across continents as she comes to terms with her grief – and the wildness of herself.


The Wild Other is, at times, a heartbreaking read. Was it hard to write?

I wrote it during a really crazy time in our life. I was pregnant with my fifth child and we were also in the middle of a building project at our house in Oxfordshire. We were living two mobile homes, so I’d go out to my office (a very ornate gypsy caravan called Gertrude), and write frantically before returning to the chaos of builders and mud. Living in a building site with four kids while heavily pregnant is no joke! But because I’d been thinking about the book for a while, I really knew where I was going with each chapter; the words poured out of me, and it was genuinely a joy to write. I finished it a week before we moved back into the house, and my son was born a couple of days later. It was pretty relentless, but exciting - I like life to be like that.


Was writing it a deeply cathartic process?

For sure it was cathartic. I’d sit sobbing at my keyboard as I was writing, and because of that I knew I was writing something that was powerful. I also had a sense that I was creating something other people would relate to. I’ve been through quite a bit in my life and lived very, let’s say, fully.

At the centre of the book is my mother, who was very ill with brain damage for 22 years following a riding accident she had when I was 16, but I’ve also written about being a mother and being a daughter, what it’s like to suffer from post natal depression, deal with divorce, and cope with someone else’s alcoholism. I’ve written very openly about adventure, danger, sex.

I’ve been getting some wonderful emails from people, saying they could really identify with certain parts of the book, and that’s such a great feeling. I hope there is a lot that people can identify with, as, in a way, the book is just about the often strange and crazy struggle of being a human being. It’s about emotion more than anything.


Your mother's accident could have put you off horses for life, but instead you flung yourself into riding. Was that a conscious response?

Both my father and mother were fearless. They did not shy away from challenges or danger. I inherited a feeling you have to engage with danger in order to feel fully alive. When I was a teenager horses were a massive part of my life; continuing to ride was my way of facing down the accident, my way of telling fate that I would not let it control me. If I’d stopped riding, I’d have it had beaten me.

Mum was so ill for so long that it would have been easy to have been crushed by the weight of sadness and trauma, but I refused to let that happen, and riding and adventuring was a way of really feeling alive, especially at the times when I was experiencing some pretty dark emotions. I think riding is great for children, as well, as it does make you brave, but it also helps you develop a sense of independence and determination, and teaches you how to care for an animal and develop a sense of empathy. Those are really great skills to grow up with.


You have five children, as did your mother: is there a link? Or did it feel right because it was familiar?

I’m very different from my mother in lots of ways, but some of the patterns of my life are quite similar. Like her, I moved from Oxford to the countryside and, like her, I have five children from two husbands. In my thirties I really felt like I was doing my own thing and living a completely different life to her, and then I got to 40 and realised that in some ways I’d followed in her footsteps. But they were great footsteps to follow. Mum made having a big family a lot of fun and I’m very close to my siblings. Having a lot of children is extremely demanding and it absolutely forces you to lower your standards and just relax, but I also do like a bit of chaos. There’s 16 years between my eldest and youngest child, so there’s definitely quite a lot of that in our lives. I love the noisy, funny, maddening mess of the random anarchy of family life.


Achievement runs in your family [Clover’s siblings include Emma Bridgewater and Nell Gifford, of Gifford’s Circus]. Was the loss of your mother a driving force?

Mum wasn’t very ambitious. She did different things. For example she volunteered as a magistrate and argued the case for organic food way before anyone had really thought about it. My father gave me a sense that work was important and interesting, as he worked really hard throughout my childhood in television and later as a writer.

My work as a journalist and writing is incredibly important to me. I would go quite mad without writing and work as a place to retreat to. I love journalism as it allows me to meet and engage with a lot of different people. But writing the book has been so satisfying creatively, as it’s given me time to really focus.

The accident certainly motivated me. Losing Mum in such a strange and violent way was a massive, on-going shock. I think all my siblings would have been pretty driven even if Mum had not had her accident, but the accident definitely spurred us all on. It gave us a sense that life is fleeting and fragile and that you really have to grab hold of it quickly.


What advice would you give your 18-year-old self?

I wish I could reach across time and give that girl a massive hug and tell her that the road ahead of her is going to be pretty scary and difficult but that she’s going to manage it all just fine. I’d also like to tell her to stop taking so many drugs!


What did you want to be growing up?

I know it’s a cliché but that moment when I’ve just given birth and am holding a newborn baby is the most amazing feeling. I’d do it again this evening if I could. It’s the most powerful thing I have ever experienced in the world.


Who or what is the love of your life?

My husband and all five of my children.

This sounds prosaic, but I was really proud of myself when I managed to buy a house in my early thirties. I was a single mother at the time, and managed to save up for a deposit and then take on the responsibility of a mortgage on my earnings as a freelance journalist. It felt incredibly grown-up. Apart from that, I was pretty pleased with myself at 23 the first time I rode a bucking horse in a ring in front of a bunch of cowboys thousands of miles from home.


What’s the most important lesson life has taught you?

Don’t accept no for an answer: everything is there for the taking if you keep going, however many dead ends you reach.


At hush we value female friendships – what quality do all your girlfriends share?

My closest girlfriends are all pretty wild and very funny. They’re the best company in the world, but dangerous company too.


You can invite six women (living or dead) for supper – who? And where do go?

Amelia Earhart, Emily Brontë,  Joan of Arc, Emmylou Harris, Boadicea and my mum. That’s a pretty fierce group of women! I’d take them for a bonfire up on White Horse Hill near my home in Oxfordshire.


What keeps you awake at night?

A sheer terror of life. Being a human is hard! And often the thought of tomorrow and getting though it makes me pretty sleepless.


The last time you laughed out loud?

I spoke at my first literary festival last weekend in Scotland. My husband Pete and I went up together, and it was the first weekend we’d had alone for at least a year. We laughed a lot and it was incredible to feel like normal adults again, rather than parents. I remember really laughing my head off in a bar late that night, although we’d been drinking vodka so my memory of what, exactly, had made me laugh so much is a bit hazy.

Wuthering Heights is the most extraordinary book about landscape, family, sex and violence. There’s no more exciting and disturbing book to read, and I want literature to make me feel intensely.

I’m working on a new idea I’m pretty excited about. I think it will speak to a lot of people, especially women. But I can’t tell you about it, as I know that if you talk too much about a book, you can talk it out of existence.


The one thing people wouldn’t know about you?

Read The Wild Other as it’s packed with all my deepest and darkest secrets! I also have a phobia about dry sponge, like a washing up sponge. It genuinely horrifies me.


Over or under dressed?

Over, though it’s sometimes difficult to achieve.

Oh spring - every time. My absolute favourite time of year.

With five kids, I’m an owl and a lark! It’s wrap-around children here, day and night.

I’d absolutely love to take the kids to Southern California

Could I take a radio? 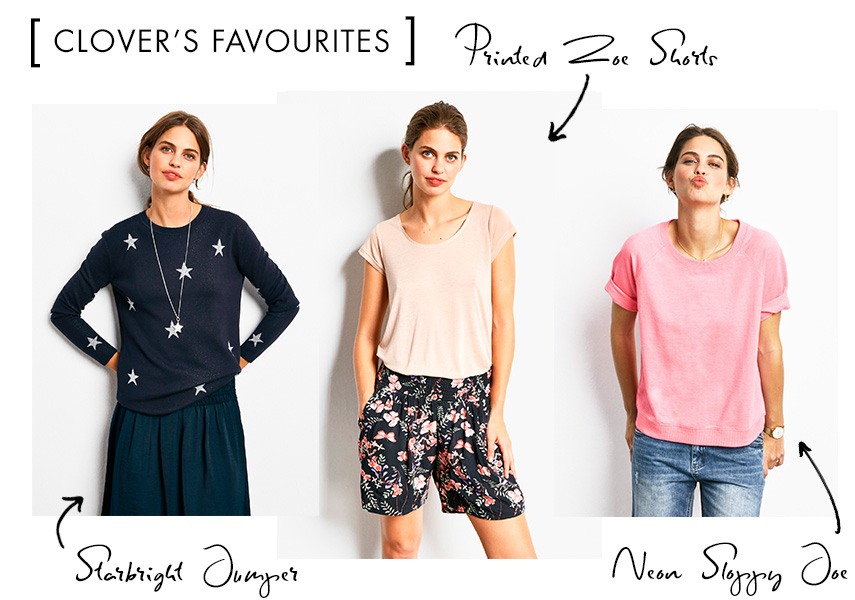 
Follow Clover on Twitter @cloverstround and pick up a copy of The Wild Other (Hodder & Stoughton, £20), available now!