Now this is right up our street: a film written and directed by a woman (Hallie Meyers-Shyer); produced by a woman (Nancy Meyers – yes, the one and only); starring one of this generation’s best comic actors (Reese Witherspoon).

Home Again is a romantic comedy starring the always-charming Witherspoon as Alice, home in LA after her divorce, whose life is thrown into chaos when three young, attractive, male filmmakers move in with her. It’s a next generation Meyers film: witty, engaging, sparky conversation and Instagrammable interiors. We caught up with the mother-daughter duo behind the camera...


What inspired the idea behind Home Again?

Hallie Meyers-Syer: I had the character of Alice in my head for a while: a woman who was starting her life over at 40. I thought the post-separation or divorce time in a woman’s life, especially a woman Reese’s age, would be interesting to see on screen. I knew someone whose mother had three young guys move in with her and her family and that concept always stuck with me. So I put the two ideas together.


Was writing it a collaborative process – or was Nancy’s a more advisory role?

HMS: I did several drafts of the script and then sent it to my mom to read. She was very supportive and gave me excellent notes, raised lots of questions, and then I went back and did many more drafts. So she was more of an advisor.


The mother/daughter relationship is endlessly fascinating/complex/affectionately exasperated! How did your dynamic play out during the process of making this movie? Did it make life easier (you know each other’s foibles) or harder (as before!)?

Nancy Meyers: It was many of those things of course, but it was also incredibly rewarding and exciting. Hallie grew up on my movie sets so it was amazing for me to see her take the reins of such a big project. She was always open to notes and collaboration and that made my job as her producer quite easy.  And yes, knowing each other as we do, made our communication very easy. Sometimes things were said in look and half sentences and silent nods and other times we’d take a moment and talk things through, but always with one goal and that was to make a good movie and because we were mother and daughter - the trust was enormous.

HMS: It was extremely helpful to have my mother as a resource throughout the filmmaking process. She was an endless well of experience and insight and we have very similar sensibilities. A quick exchange of glances on set and I’d know exactly what she was thinking.


What’s the best advice your mother gave you, Hallie?

HMS: She constantly gave me advice and counsel during this process but something else she gave me was courage, which was just as important. She made me feel confident in my instincts and the encouragement to express myself to the cast and crew.


In recent times, there seems to be a (slow!) shift away from the paucity of roles for older actresses. Is the same thing happening in terms of female directors?

NM: Only 7% of the top grossing 250 films were directed by women last year. That’s a 2% decline from the year before. There’s so much conversation about this, but the numbers are going in the wrong direction. Wonder Woman was a great victory, but it can’t give everyone a free pass now not to seriously consider women directors for other films.


Reese’s character Alice, is part of a Hollywood clan, as is Hallie. Was that a deliberate nod to your own set-up – or is it that you just feel a connection to romantic comedies as it’s the genre you grew up with?

HMS: It didn’t start out that way. At first I made Alice’s father a 70’s filmmaker and her mother an actress as a way to infuse the era of cinema that had inspired me most while writing the movie. But once I added this history to the character, it did make me feel connected to her, especially in the scene where Alice is watching her father’s film. 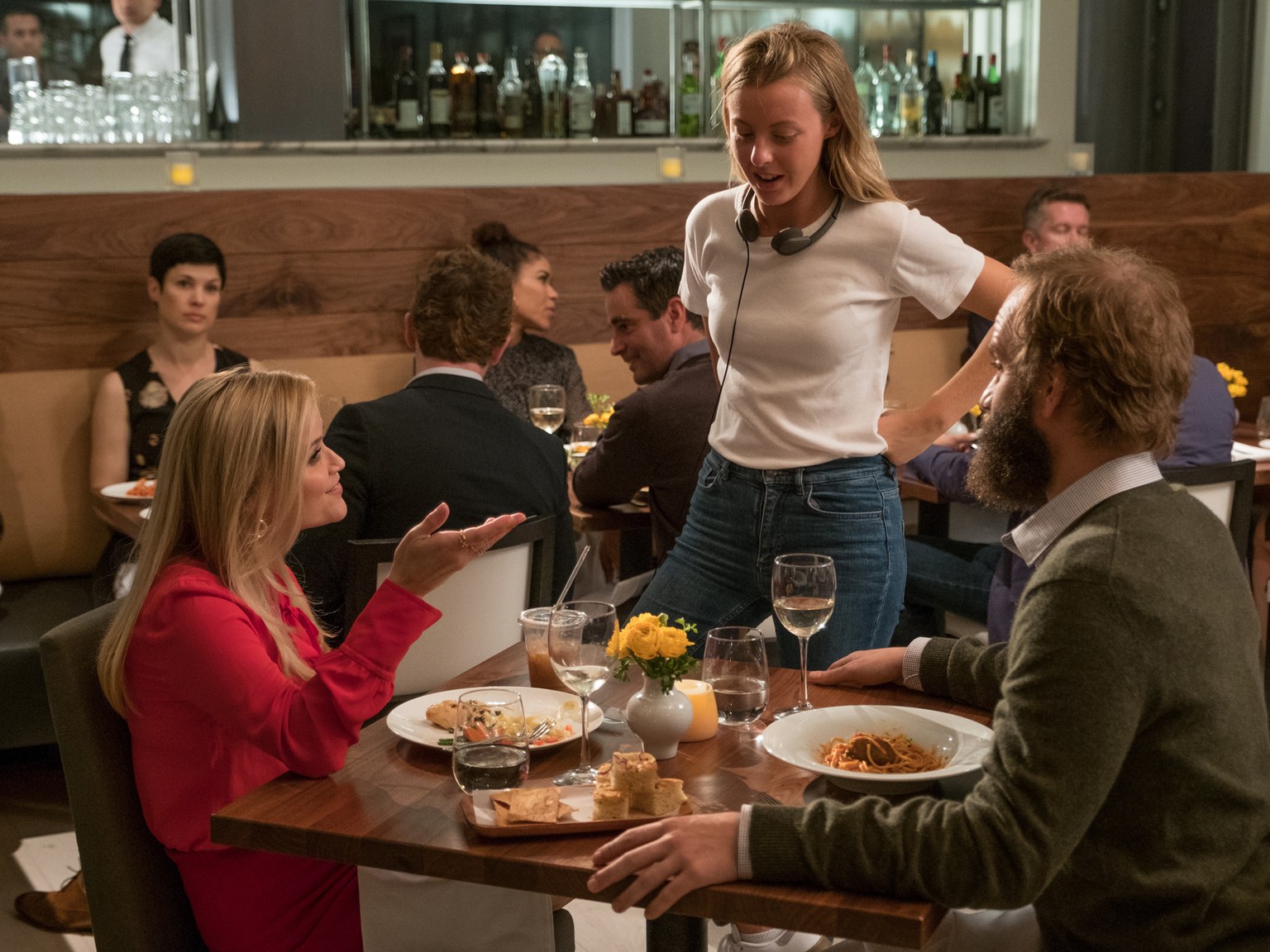 Hallie directing on the set of Home Again.

HMS: I would have to say this film honestly. Getting a movie made in this day and age is incredibly difficult and I was able to work with so many talented people both on and off the screen. It was a challenging and hugely rewarding experience and I’m very grateful to have had this opportunity.


What would you tell your 18-year-old self?

NM: Ha ha. That’s a good one. My 18-year-old self? I would tell her not to bleach her hair at home with that silly spray - that it will turn orange. Not to waste too much time worrying about guys. Read a lot. Watch a lot of great of films, and travel as much as possible. And I’d whisper in her ear - it’s all going to work out… so relax a little.


Best advice you’ve ever been given?

HMS: To write what you know.

NM: Don’t count on others for approval… it’s more important how you feel about yourself. And of course - hard work pays off. 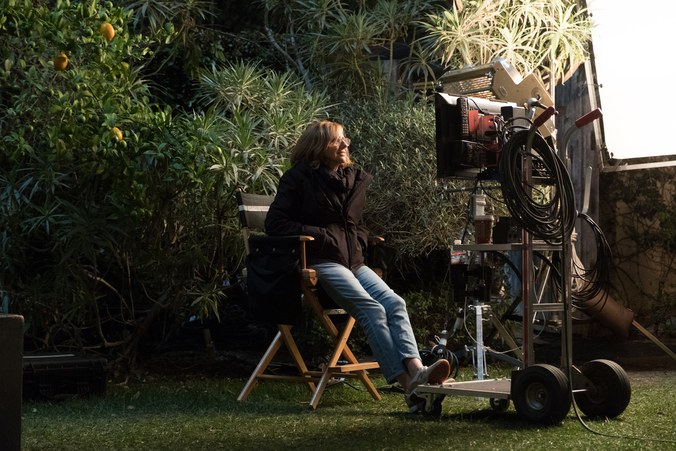 Nancy on the set of Home Again.


What are you reading/watching/listening to at the moment?

HMS: Game of Thrones. I just binged watched all seven seasons. It was extremely intense.

NM: Dark chocolate but I don’t feel that guilty about it.

NM: Surrounded by my family. 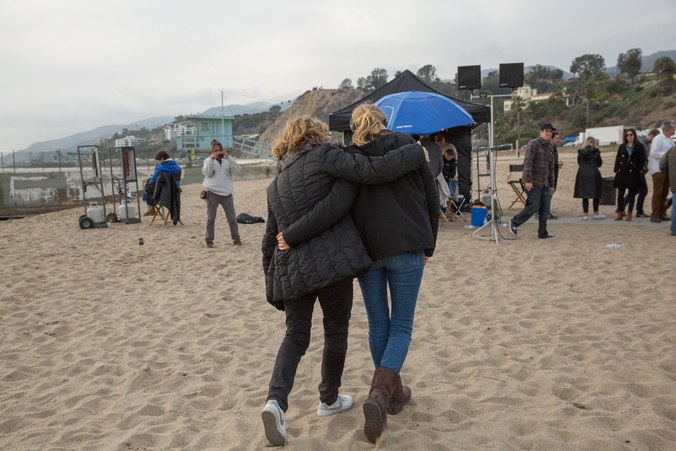 The mother-daughter duo on their last day of shooting Home Again.


Home Again will be in cinemas from the 29th September, view the trailer here.