It looks like you're visiting from country. Please click here to continue shopping.
Final Reductions | Now up to 70% off

Midsummer madness! We chat to the cycling bards about performing Shakespeare sustainably 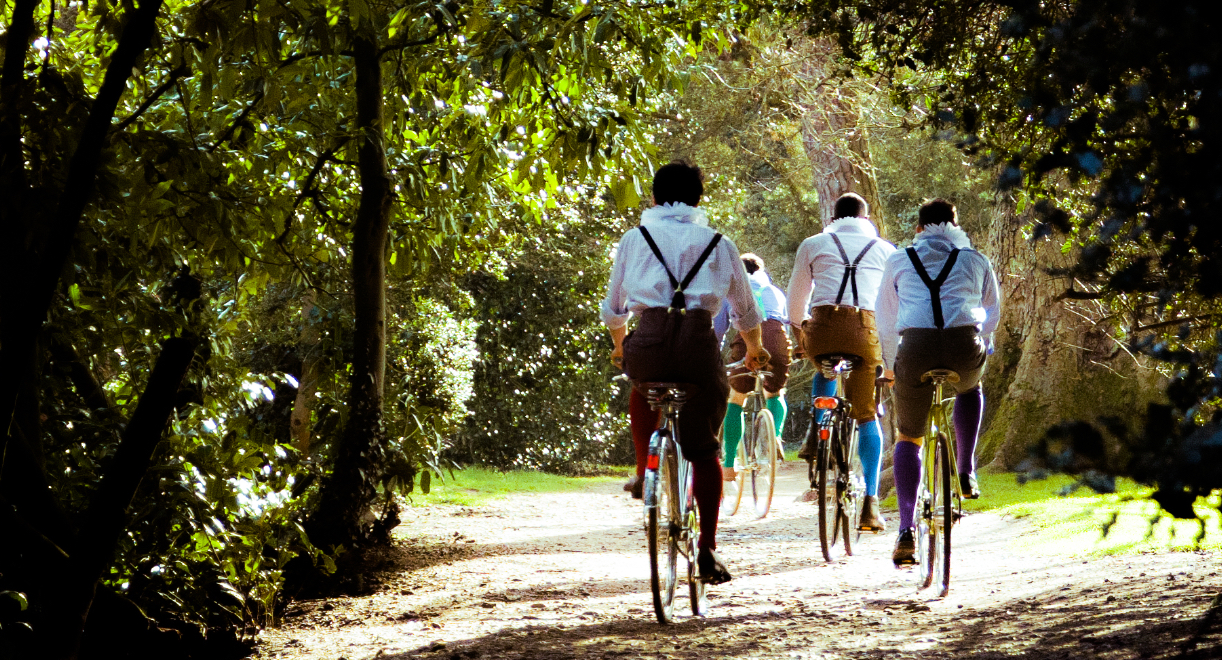 It’s in Act Four of Macbeth that one of the play’s bloodiest murders is revealed: a paranoid, power-crazed Macbeth has pulled a fast one over his rival, Macduff, by slaughtering his wife and children.

Whatever word you’d use to describe this moment (brutal? Tragic?), you probably wouldn’t say it was humorous. However, cycling Shakespearean actors The HandleBards perform this scene as a comedy.

“We see moments like that and think, ‘there’s a bit of fun to be had with that!’” says founding member and producer, Tom Dixon. “In some ways, Macbeth was definitely written as a comedy.”

This farcical, light-hearted approach to Shakespeare is what The HandleBards are known for. Founded in 2013 by a group of bard-loving pals, the theatre company brings their version of Shakespeare to the world via two wheels, with all props and staging equipment packed into saddlebags on the backs of their bicycles.

“We wanted to do Shakespeare in a more adventurous and environmentally friendly way,” says Tom. “We didn’t have much experience cycling, but once we’d come up with the name ‘The HandleBards’ we thought it’d be rude for us not to tour the country performing Shakespeare by bike.”

In their first year, they clocked up 927 miles performing their version of Twelfth Night in 30 outdoor spots up and down the country. It was an instant hit. Before the year was out, venues were already requesting repeat performances. As such, each year they’ve performed shows at bigger and better places, ranging from British bike shops to the Gardens by the Bay in Singapore.

“We suddenly found ourselves globe-trotting and performing this silly version of Shakespeare to hundreds of people,” says Tom. 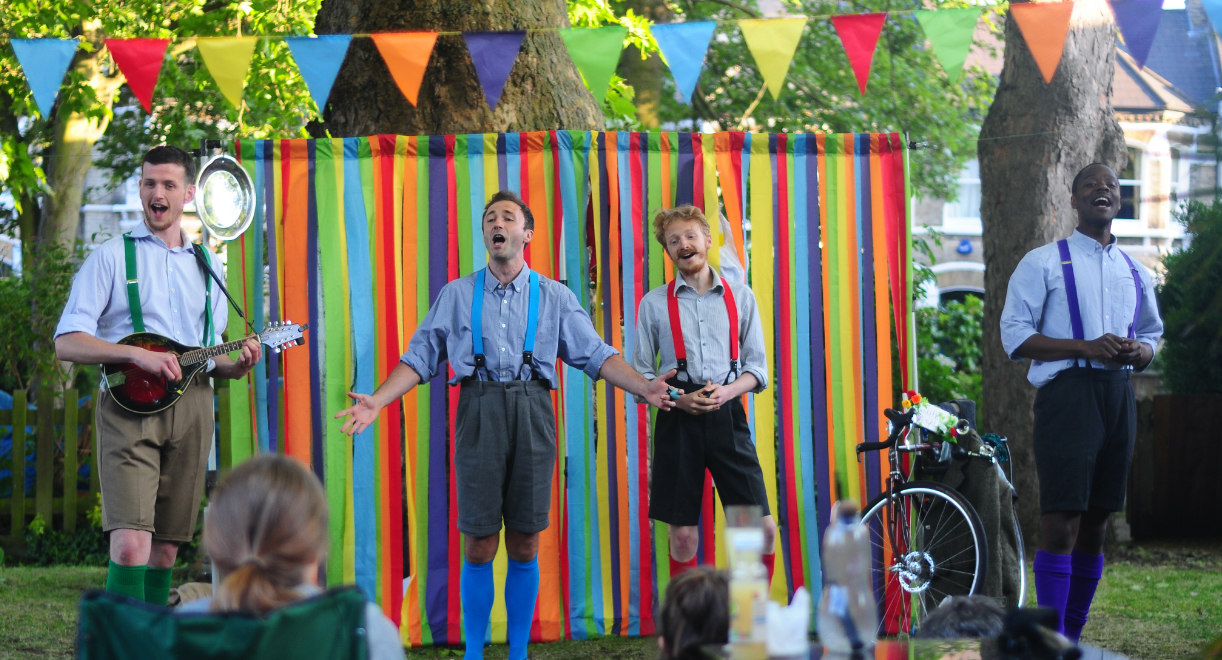 The “silly” version he refers to is, a slapstick interpretation of Shakespeare that Sir Ian McKellan himself has described as “uproariously funny”. All roles are played by three actors, with any extra characters subbed in with the help of props, puppets and – pre-pandemic – unwitting audience members.

“The whole point is that it’s a shared experience,” says Tom. “When we performed Twelfth Night, we had Sir Toby Belch heading out into the audience to steal picnic foods, drink people’s ales and all sorts of nonsense like that!”

It’s a fun, light-hearted approach that finds the light in life’s darkest moments – like when Ross reveals the murder of Macduff’s children in Macbeth.

“I think what makes a really good show is when the words of the play are twisted into a meaning that you weren’t expecting,” says Tom. “So, when we read that section, Ross was just so rude, and we could see the fun in it.”

This summer, they’ll be hitting the road to perform Macbeth with their signature HandleBards spin. As well as plenty of slapstick and what Tom describes as a “hilarious” moment with a floating dagger, it’ll also be an all-female cast.

“Macbeth is typically such a macho show,” says Tom. “So having an all-female version is great because they can make a real pastiche out of what it means to be ‘masculine’ and ‘macho’ and pull the comedy out of that”. 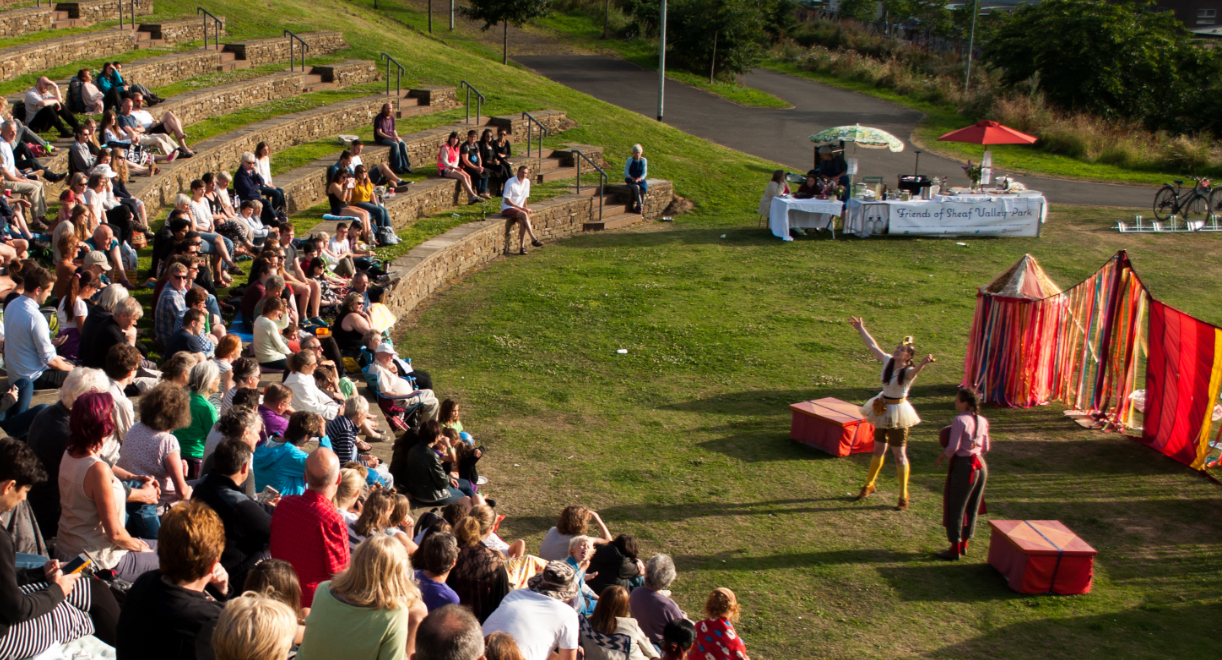 Talk turns to the handlebar side of things. To us, spending an entire summer cycling the country sounds like, well, an awful lot of toil and trouble. Still, after too many bikes pushed up hills and perhaps not enough showers, Tom explains that it’s precisely this way of travelling and performing that drives the creativity and comedy they bring to every performance.

“The HandleBards’ shows wouldn’t be interesting if the bikes hadn’t limited how many props or costumes we could carry,” he says. “We’re much more creative in that sense.”

It’s also much more environmentally sustainable. They’ve clocked up over 7,000 miles on their bikes, offset all international flights – with the aim of eliminating international travel completely – and have practically binned print marketing. It’s a winning formula: they were awarded the Edinburgh Fringe Sustainable Practice Award in 2014 and have been nominated for The Stage’s inaugural Sustainability Award.

“It feels like our responsibility to leave the world in a better place than when we found it,” says Tom. “As a theatre that goes to people rather than expecting people to come to it, there’s a sense of getting into the community. That presents us with a unique opportunity to inspire people. If we’ve cycled 1500 miles across the country, you might want to cycle to work tomorrow. We hope that if people leave our shows with a big smile on their faces, it might seed the idea for them to make those little changes to their lifestyles.” 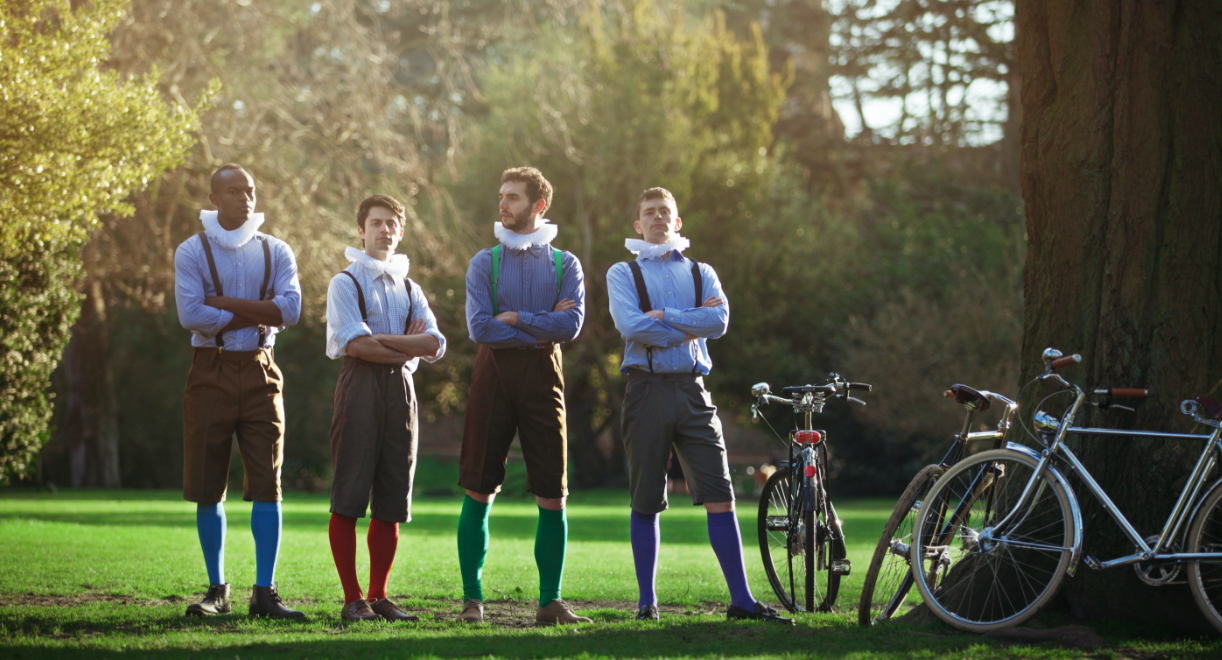 So, what’s next for them? Due to social distancing requirements, this summer’s run of Macbeth will involve a wooden stage with bike-powered mechanisms that will follow the cyclists in a specially constructed electric vehicle. They’re also looking to create their own permanent theatre made from living trees in Sheffield – as well as putting on more frantically funny antics.

“Purists might disagree with what we’re doing,” says Tom. “But we are staying true to the text as well as finding a new way of making Shakespeare accessible. The point of the evening is that it’s three storytellers coming to tell you a story that you know quite well, but we want to do it in a way that makes everyone in the family laugh – from toddlers through to grandmas”. Midsummer madness indeed.

The HandleBards will be performing Macbeth across the country from 7th – 27th July; locations and tickets are available here.