A taste of Borough Market 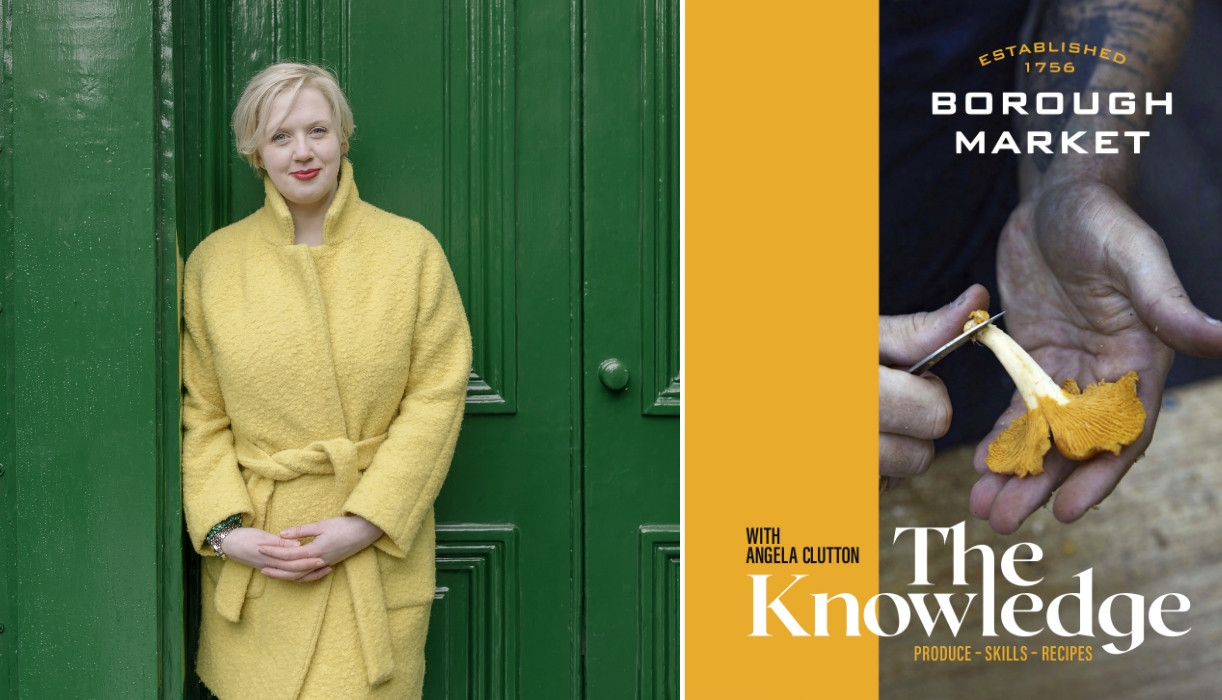 Few places are as synonymous with extraordinary produce as Borough Market. One of the oldest food markets in London – where the traders are as famous as their artisan ingredients – it’s long been a draw for foodies and chefs alike. And no one has the inside track quite like food writer Angela Clutton. Host of Borough Market’s Cookbook Club and the Borough Talks podcast, her new book Borough Market: The Knowledge does exactly what it says on the tin, bringing together the knowledge of the market’s expert traders to produce over 80 delicious recipes.

As for what makes Borough Market so special? ‘It’s down to the connection between produce, traders, shoppers and the market community,’ says Angela, who describes herself as ‘head over heels in love with Borough Market.’

As visitors to the market will well know, the experience at Borough is as much about the conversations with stallholders as it is picking up of produce, and nibbling on the likes of Worawan Kamann’s delicious khanom krok coconut pancakes or JUMA Kitchen’s popular kubba (stuffed dumplings).

As you browse, passionate producers advise on how to bring out the best of their produce. For example, fourth-generation farmer Kath Dawson of Ted’s Veg might extol the virtues of organic farming or Marianna Kolokotroni at Oliveology might illuminate why olive oils should be viewed the same way you would a wine, considering variety, and how terroir can truly impact flavour.

A real love letter to the market, Angela has captured all of this wisdom, describing the book as ‘like every conversation I’ve had over the years with the market traders, with all their years of experience coming together.’ As well as this, she hopes it will allow people to ‘feel the Market experience. To get a sense of its energy, its positivity, and that appreciation of good food bounces off its every railway bridge arch and cobbled alleyway,’ even if they can’t get there themselves.

Here, she shares two of her delicious recipes from the book – a comforting spring soup and moreish chocolate olive oil cake – which are easy to recreate at home: 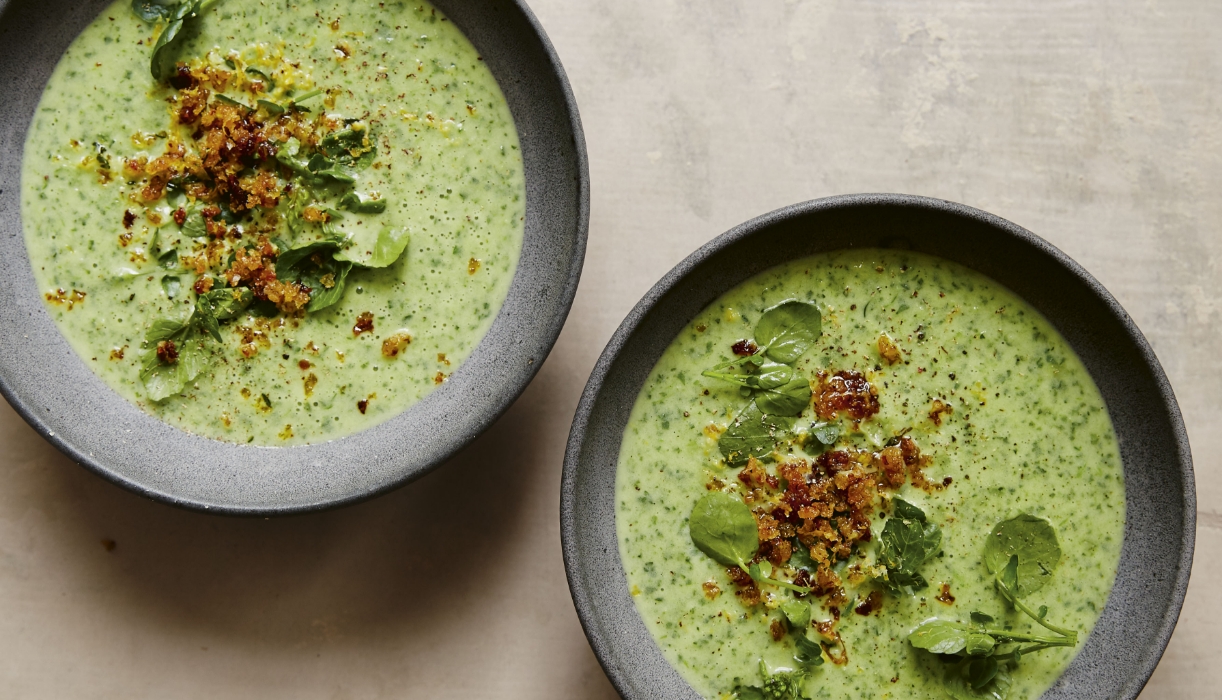 Angela says: ‘This beautiful flecked-green soup is a bowlful of spring flavours. And like many a spring day, it can be warm or chilled. It’s a great way to use watercress that is a little past its perky best. I’ve provided a swap for the amontillado sherry in case you don’t want to use it. It really does give the soup extra depth, though. Serve with slices of a strong, hard cheese on oatcakes to make this light soup into something heartier.’

For the lemon and thyme breadcrumbs

1.  Peel and finely chop the onion, then chop the celery. Melt the butter in a large saucepan over a low heat. Add the onion and celery and cook until they soften but are not turning brown. While that is happening, peel and dice the potatoes.

2.  Stir the potatoes into the softened onion and celery, then stir in the milk, sherry (or vinegar) and the stock. Season, increase the heat to bring to the boil, then reduce the heat, put the lid on and simmer gently for 25 minutes or until the potatoes are very tender.

3.  Add the watercress, keeping back a few sprigs for garnish. The watercress will need only a minute to cook. Take off the heat. Use a blender to liquidise the soup until it is as smooth as you like it, adding the cream if you think it needs thickening. Check the seasoning.

4.  To fry the breadcrumbs, heat the olive oil in a small frying pan over a medium heat, then add the breadcrumbs and thyme leaves. Stir continuously for about 3 minutes until they have browned and crisped. Remove from the heat. Grate the zest of the lemon half and stir through.

5.  Serve the soup warm or cool, garnished with the reserved watercress sprigs, the crisped breadcrumbs and a grating of fresh nutmeg. This soup freezes well, but fry the breadcrumbs just before serving 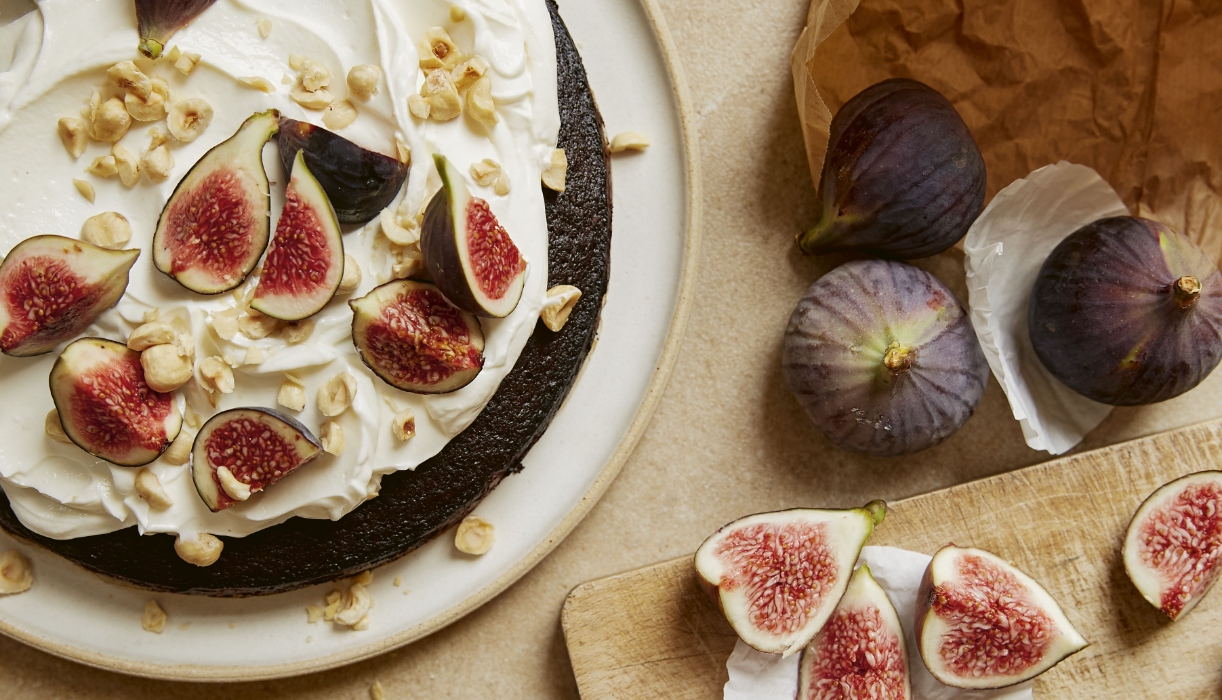 Angela says: ‘This is a pleasingly elegant cake to serve as a dessert. It’s not overly rich, and has a lovely tangy bite from the yoghurt topping, with hazelnuts giving that topping crunch as well as flavour. This is the place for using a good, but not necessarily the absolute best, olive oil. You want something with a mild flavour that isn’t going to overwhelm the other elements.’

1.    Preheat the oven to 170C fan/190C/375F/gas mark 5. Grease the sides of the cake tin with a little of the oil, and line its base with baking paper. Sift the carob flour or cocoa powder into a bowl, then whisk in 125ml boiling water and the hazelnut liqueur. Set aside.

2.   Put the sugar, the rest of the olive oil and the eggs into a large mixing bowl. Use an electric whisk to beat them together until thickened: you are trying to get lots of air into the mix. Beat in the carob flour/cocoa powder mixture, then sift in the flour and salt. Gently but thoroughly fold the flour in – you don’t want to lose all the air you’ve just beaten in – then pour the mixture into your prepared cake tin. Bake for 35-40 minutes until just about set.

3.   Remove from the oven, cool on a wire rack for 10 minutes, then remove from the tin and leave to cool some more. Once the cake is cool, spoon the thick yoghurt on top. Slice the figs and arrange those on top too. Chop the hazelnuts, scatter over and slice. You can bake the cake ahead of time and store it without the topping in an airtight tin. It will keep well unadorned like that for up to 3 days. Once topped with the yoghurt, figs and nuts, it is best eaten that day.

'Consider whether you're buying a single-variety olive oil or a blend. If the oil is produced from a single variety of olives from a single plantation you can – like wine – really taste the terroir ... I recommend that people go around Borough Market and try different olive oils from different stalls to see which flavour they prefer. I don't believe there is a 'best' olive oil in the same way there isn't a 'best' wine – it's totally subjective.' Marianna Kolokotroni, Oliveology

Borough Market: The Knowledge with Angela Clutton is published by Hodder & Stoughton. Photography by Kim Lightbody