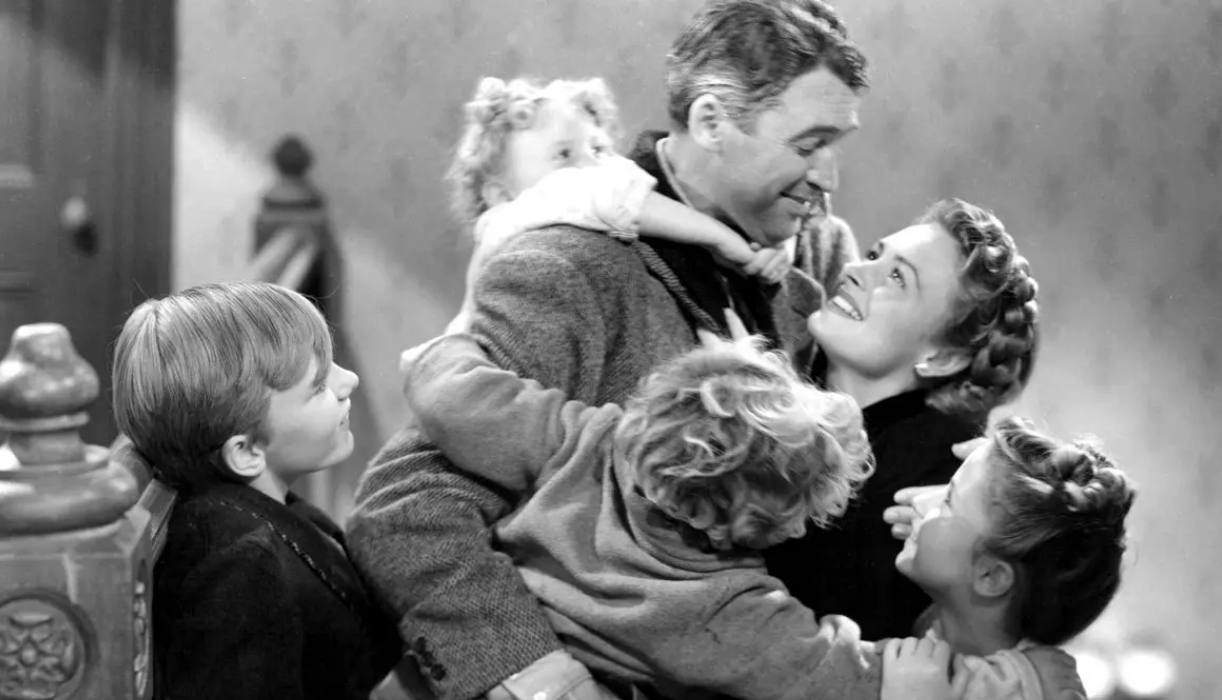 If you’re lucky enough to be spending the days between Christmas and New Year’s Eve (or, as some call it, Betwixmas) laid horizontally in front of the telly, drowning in leftovers and avoiding eye contact with that pile of foil-covered chocolates in the corner, we’ve got the perfect accompaniment to your slumber-state: a list, curated by us, of the cosiest classic films to watch over the festive season. From old-school black and white romance to Christmas classics you may have forgotten about, our list brings a welcome dose of nostalgia and guarantees some of those warm and fuzzy feels! Pass the popcorn.

How could we resist a film with a plot that inspired one of our all time favourite autumnal rom-coms – You’ve Got Mail? This will-they-won’t-they old-school love story is as charming and hilarious as the 1990s remake, following shop assistants, Alfred Kralik (James Stewart) and Klara Novak (Margaret Sullavan), whose frosty relationship at the gift shop they work in does not translate in their letters to each other as secret (at least to each other) pen pals. There’s a Christmas build-up, forgiveness, redemption, and humour – everything you could ever need in a cosy, feel-good festive film.

It doesn’t get much more festive than musical numbers, romance and Bing Crosby, which is why this 1954 flick is on our list. It’s not black and white but it is full of classic qualities, from the costumes and dance numbers to the set design. There is something about the film’s cheesy, a little bit out-of-the-box plot that epitomises the chaos of the Christmas season and keeps us coming back to White Christmas year on year. It’s a film that you’ve probably got on DVD, VHS and whatever came before that… (it’s pretty old). But, you can certainly guarantee it’ll be on the TV schedule this time of year. Best served with hot chocolate and an entire chocolate orange…

If, like us, you’re a big fan of any and all adaptations of Louise May Alcott’s 1868 novel, then you too will be familiar with the festive quality and heart warming quirks of the 1949 version of Little Women. The plot provides a sense of comforting cosyness, following the timelessly relatable March sisters – Meg, Jo, Amy and Beth – as they navigate life in small town Massachusetts where they’re often accompanied by a snowy scene or flickering fire. You could opt for any version (we’re also BIG Greta fans) of Little Women to get a festive fix, but there’s just something about this scratchy black and white film that provides perfectly nostalgic festive feels.

You’ll struggle to scroll on any streaming service this season without stumbling upon It’s a Wonderful life,  (objectively) the most-loved Christmas film of all time. And, we thought we’d cause ourselves some seriously bad Christmas-karma if we didn’t include it on our list. After all, it’s classic, beautifully shot, and wonderfully festive. Frank Capra’s masterpiece follows George Bailey (played by Jimmy Stewert), after his wish of never having been born comes true. Guided by an angel, you follow Bailey as he discovers the true meaning of his life, and the impact he’s had on those in it. There are laughs, dramas and (spoiler alert) guaranteed tears, so bring the tissue box and some extra feel-good leftovers for this one!

There aren’t many movies that boast as much Christmas spirit as Miracle on 34th Street. Whether or not you believe in Santa Claus (we won’t be getting into that debate here), following Kris Kringle (played by Edmund Gwenn) on his redemptive arc from intoxicated Macy’s float actor to a quietly charming Santa Claus gets you feeling all the festive feels. The story is wrapped up in a court case surrounding Santa’s real identity, which created the original notion that Santa really could be anyone you see walking down the street. It’s this magical quality that makes the original and subsequent adaptations of Miracle on 34th Street a Christmas classic we won’t be skipping out on this year.

We’re all very familiar with the story behind Charles Dickens’ classic A Christmas Carol – three ghosts, one grumpy Scrooge and a lot of festive storytelling, teaching Ebeneezer that a little Christmas cheer can go a long way. Whether it’s told by bookkeeping muppets or an amateur theatre company at the Panto, retellings of this classic story never get old. Saying that, there’s nothing quite like the 1951 black and white original with Alastair Sim, who to many will always be the ultimate Ebeneezer Scrooge. It’s heartwarming, a little spooky in places, and is a perfect watch for snuggling up on the sofa and getting in the mood.

It’s definitely not classed as a Christmas film, or festive flick, but Breakfast at Tiffany’s is one of our all time favourite classics and makes its way into this list because of the hilariously charming love story between eccentric wannabe society girl Holly Golightly (played by Audrey Hepburn) and struggling writer Paul Varjak (played by George Peppard). The pair keep you entertained as they galavant through New York City, first becoming great friends, and then lovers, all the while meeting the most eclectic group of acquaintances that bring so much humour to the performance. The colours, costumes and charisma are reason enough to feast your eyes on this movie while we get in the mood to ring in the New Year. After all, who cares what day it is when you can lose yourself in Tiffany’s!