Whether you love or loathe it, there's no denying the thought of classic, pink, rose-scented Turkish Delight conjures up distant memories of fur coat-filled wardrobes, thick falling snow and an enticing White Witch...

Straight from the pages of C. S. Lewis's childhood classic, Kate Young has brought the authentic recipe to life in her latest literary offering 'The Little Library Cookbook'. Simple yet nostalgic (and sufficiently sugary), it makes a great edible gift!

"I was obsessed by Turkish Delight long before I ever tried a piece. I decided that, for Edmund to choose it as the thing he’d most like to eat in the world, it had to be pretty special. By the time he’d abandoned his siblings for the promise of kingship and Turkish Delight, I was hooked. I had to try it. In Australia, you can buy bars of chocolate-covered Turkish Delight, and they quickly became my favourite –more for Edmund Pevensie than for their heavily floral taste." -  Kate Young 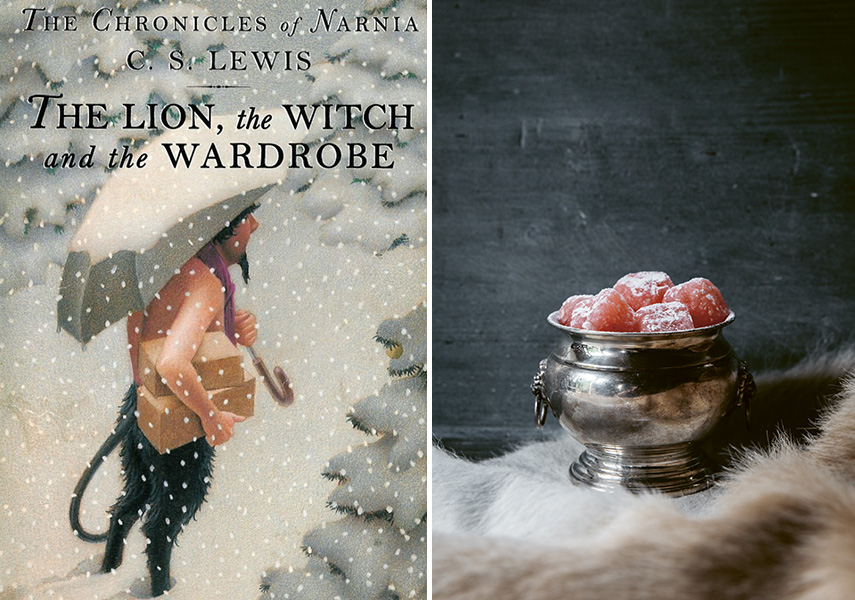 "‘It is dull, Son of Adam, to drink without eating,’ said the Queen presently. ‘What would you like best to eat?’
‘Turkish Delight, please, your Majesty,’ said Edmund."
The Lion, the Witch and the Wardrobe by C. S. Lewis

1. Place the sugar and lemon juice in a small saucepan with 175ml/6floz/¾cup water. Put the pan over a low-medium heat and stir until the sugar is dissolved. Once the liquid is clear, stop stirring and heat until the sugar syrup reaches 118ºC/245ºF (around 15 minutes).

2. Line a baking tray with plastic wrap, smoothing the base and sides as much as possible. Sift the cornflour into a medium saucepan, along with the cream of tartar and 300ml/½pint/1¼cups water. Place over a low heat and stir continuously. The mixture will start to thicken. Keep cooking it until it resembles hair sculpting paste – thick and gloopy. If the sugar syrup isn't quite ready by this stage, take the cornflour mix off the heat.

3. Once the sugar syrup is ready, put the cornflour mixture back over a low heat. While stirring, slowly pour the syrup in. Continue to stir over a low heat for around an hour. The mixture will look strange (and separated) at first, but it will come together. When it’s done, it will have taken on a golden tinge and be very thick and difficult to stir. I know this is a long time to keep stirring, but I find it soothing – it’s something you can do with a Christmas film playing.

4. Remove from the heat and beat in the rosewater and food colouring.

5. Scoop the Turkish Delight into the lined tin – this will be messy. Smooth the top of the mixture with a wet spatula and push the top down. Cover with a tea towel and allow it to set overnight in a cool room.

6. The next day, take the Turkish Delight out of the tin and peel the plastic wrap off. Wet a knife with hot water and slice into squares. Sift the cornflour and icing sugar into a shallow bowl (along with the edible glitter if you're using it). Drop the squares into the bowl and toss to coat each piece. Shake each piece off before placing it in a storage box. Keep in a cool, dry place, with greaseproof paper between the layers.

These should be eaten within a week of making them. Try to do the final step – rolling them in icing sugar and cornflour – as close as possible to gifting them; do it too long beforehand and the sweets will have absorbed your decoration by the time the box is opened.


Recipe from 'The Little Library Cookbook' by Kate Young, photography by Lean Timms.