Your cookies are disabled. To experience the full world of Hush, please enable these or check whether another program is blocking them. By enabling them, you are agreeing to our Cookie Policy
This website uses cookies. You can have a look at our Cookie Policy for information about what they are, why we use them and how to manage them. By continuing, you’re agreeing to accept them…
Free UK Delivery and Returns

Why We All Need Our Unlikely Friends

Sometimes, the most improbable combinations are the best (salted caramel; ham and pineapple pizza; strawberries and balsamic vinegar…) The same can be said of friendships: on paper, they simply don’t add up, but in person, there’s an alchemy which makes them work. Writers Radhika Sanghani, Grace Timothy and Tasmina Perry share their stories about the life-enhancing power of unlikely friendships... 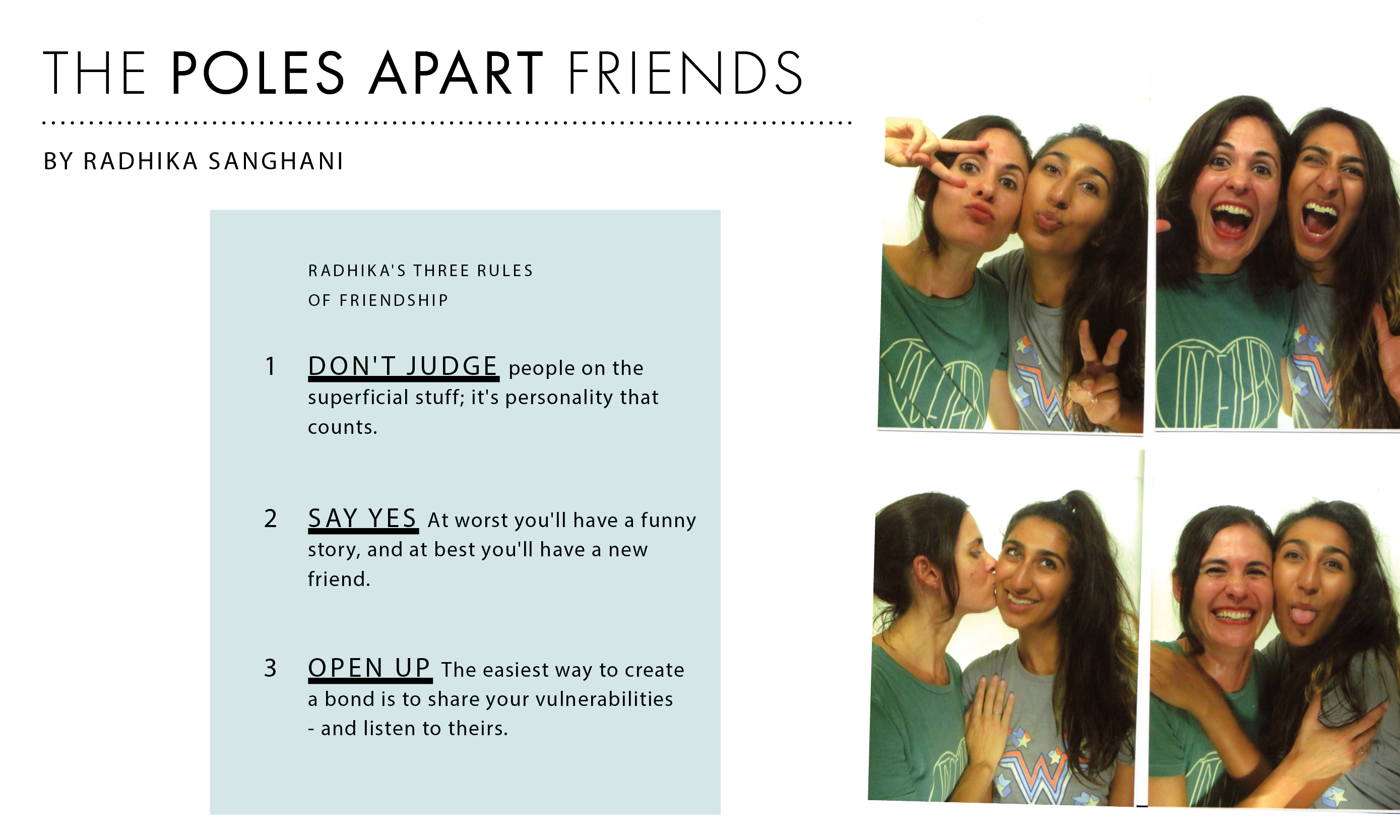 “Can you feel my energy?” asked Cristina. “If you stay still, you should be able to feel vibrations on your arms.” I’d met Cristina the night before at my new flatmate’s birthday and we’d got on so well that we’d arranged a coffee the following day. But it was not going how I’d imagined. We were no longer sharing funny stories about dates; she was showing me her healing energy therapies and I had no idea how to respond.

Back then I was 22, spending my summer in Barcelona, and focused entirely on having a good time. I had no idea what properties crystals had, and I didn’t care. But Cristina had trays full of crystals and used them in her healing therapies. Plus, she was a vegan, barely drank, and at 34, a full 12 years older than me.

On the surface, we had nothing in common (especially considering our entire friendship was conducted in her fluent, and my broken, Spanish) but she was so warm and positive that I kept making plans with her. Over that summer, she became the big sister I’ve always wanted, and six years later, we’re now so close that I’ve moved back to Barcelona to spend time with her.

Cristina is just one of the ‘unlikely’ friends I have. In the same way that Harry Styles is best friends with Cindy Crawford, and Meryl Streep regularly hangs out with 50 Cent, I’m no stranger to the joys of being friends with someone from a completely different background, generation or social group. Over the years, I’ve realised just how refreshingly enriching it is to get to know people who haven’t spent their teens growing up in North London, and don’t work in journalism.While I have lots of important friends I’ve made in my childhood, and in the workplace, I also need my unlikely friends. My ‘normal’ friends bring so much to my life, from familiarity to unadulterated fun, but they rarely challenge my expectations or perceptions in a way that Cristina, with her spirituality and free-spirited life at 40, does. Or Susan, my 85-year-old disabled neighbour who I visit every week after meeting her through a volunteering scheme with Age UK. Every Sunday, she gives me advice on how to meet a ‘dashing young chap’, while I paint her nails and try to explain what Tinder is.

These friends all bring me new perspectives, and experiences I never imagined. Take Christie and Jamie. They’re both American women in their 30s who I met on holiday in Spain last year, when we bonded over our shared love of red wine and tapas. Unlike all of my existing friends, they work in scientific fields, do extreme sports, own a tent, and last Christmas, invited me to join them on a hiking holiday to the Grand Canyon. None of my friends understood why I was considering it. “You’ve only ever met them once,” cried a friend I’ve known since we were 11. “Besides, since when have you ever done exercise out of choice?” My family were just as bemused. “Wouldn’t you rather go on holiday with the school girls?” asked my mum.

Their cautions unnerved me, but I thought back to how relaxed and refreshed I’d felt with Jamie and Christie - and said 'yes'. It turned out to be one of the most interesting, exhilarating holidays I’ve ever had. We spent the whole time laughing, even mid-hike, and they taught me to appreciate nature in a way I never have before. We’ve even planned a road trip to Italy. Of course, these friendships aren’t always easy. It’s hard to leave your comfort zone, and there have been times when I’ve struggled. It was nerve-wracking saying yes to all of these opportunities – so few of us are used to making friends in our adult years – and I had no idea if it would work out. Like when I was exhausted after four hours of hiking in Utah and desperately wished I was on a beach with my exercise-averse school friends. Or when Cristina wants a quiet night in and I’m desperate for a drink.

But it’s all a compromise, and it’s so worth it. These friendships have given me memories I’ll always treasure, and they’ve helped me grow as a person. I’ve learnt to ditch my prejudices, expand my horizons, and, thanks to Cristina, I’m currently wearing a self-compassion-inducing rose quartz crystal around my neck. Namaste.

Radhika Sanghani is features editor for BBC Three and author of Virgin: A Novel and Not That Easy. 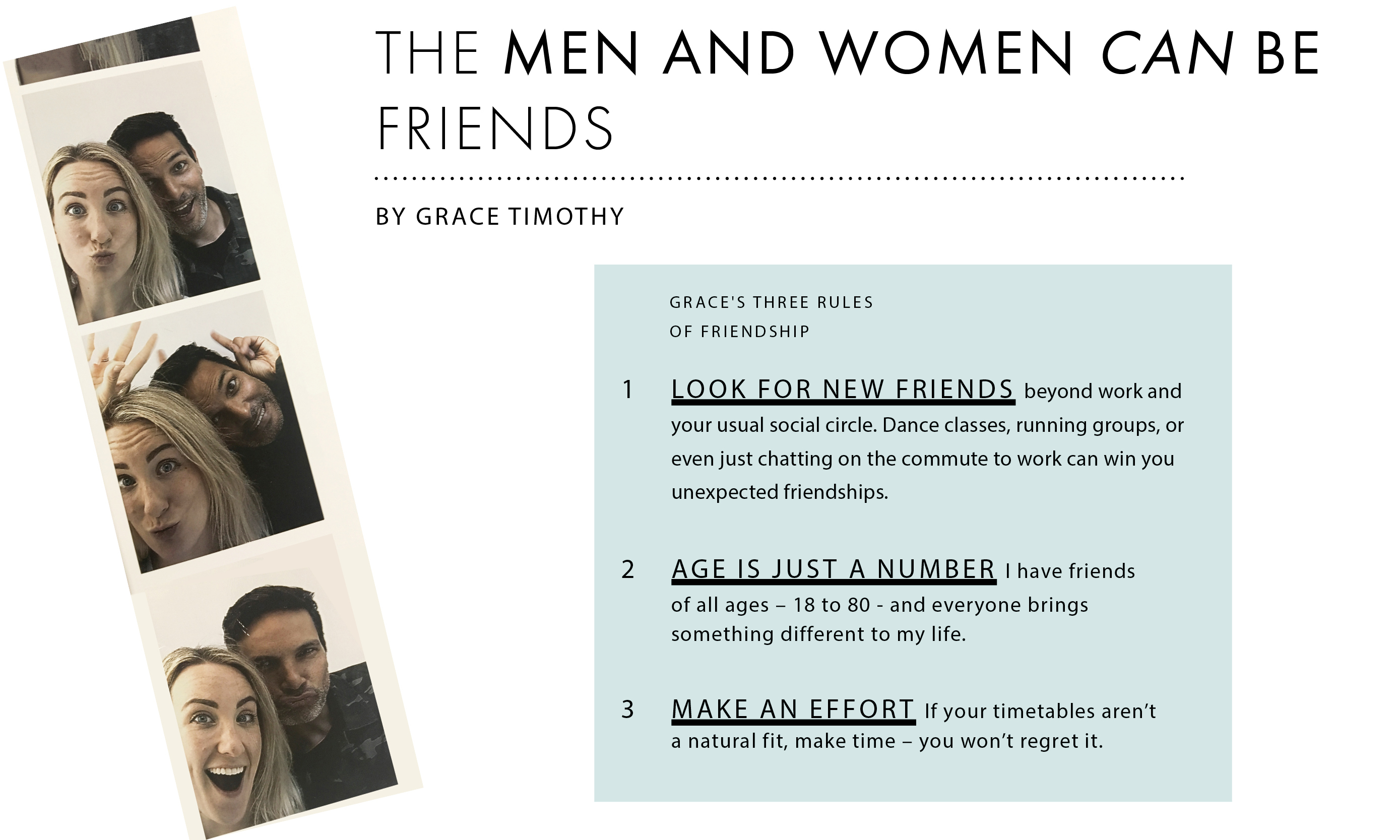 I’ve always been a girls' girl. Throughout my education and career, I was part of various close-knit groups of girlfriends. Girls from a similar background who were a similar age, from just up the road. Our perspectives rarely differed, our lifestyles matched comfortably.

But Mathew and I are not alike. He is an actor living with his boyfriend in York, and I am a writer living in Sussex with my husband and daughter. He travels all the time, while I juggle being a stay-at-home-mum and a work-from-home-writer. He’s a former model, I was the kid with a squint and braces. I’m 35 and he is…actually, I have no idea how old he is because he says he’s older than me but he looks about 10 years younger. We’ve been friends for nearly eight years, and nobody makes me laugh – great belly-breaking cackles – like Mathew.

We met when he toured with my dad – also an actor. He was my dad’s friend but, when he introduced us, dad couldn’t get a word in edgeways as we quickly realised we shared a passion for writing, the same aspirations of clean living tempered by dirty habits, and loved the same books, films and beauty products. We messaged each other all the time and travelled the length of the country to catch up over the coming months.

Then less than a year later I found out I was pregnant. I thought that would end us. The shared ground would fall away, the opportunities to meet would grow sparse. What, would we prop the baby up on the bar while we shared a bottle of Prosecco in Soho?! Would he sit on the edge of our sofa, surrounded by sick-soaked muslin cloths while I tended to my leaky boobs?

But nothing changed in his manner, or our chats. He listened, he burped the baby and cleaned her up. He actually seemed to understand what I was going through far better than fellow mums. Six years later, we’re back to our Prosecco dates, the most recent of which went on four hours longer than planned.

He brings a wisdom but also a sense of peace that I don't get from other friends. He’s full of advice and brimming with compassion. He has years’ worth of stories and can make me feel like the most vital, fabulous thing in the world. He gently encourages me to think differently about the world and crucially, myself. So although we grew up in different worlds at different times, live so far from each other and aren’t even the same sex, I’m so glad I managed to hook myself a Mathew, and that he stuck around. We are definitely kindred spirits, and I’m glad we didn’t dismiss one another before realising what wonderful friends we would become.

Grace Timothy is a journalist and author of Mum Face: The Memoir of a Woman Who Gained a Baby and Lost her Sh*t.

It all started with an email with the opening gambit, ‘I’m your biggest fan’. Now, for most people, it’s always nice to receive a compliment, but if you’ve ever read the Stephen King book Misery, and especially if you are a writer, it has you reaching for the pepper spray.

But I wrote back. You see, I’d been hearing lots about Bella Andre, the sender of the email. She was blazing a trail in the world of self-publishing, and I was interested in hearing her take on the industry.

Before we knew it we’d arranged to meet for coffee when she was next in town. Four hours after ordering our lattes in a café in St James Park, we were still there, chatting, laughing and soul-searching, and four years on from that, we still see each other every couple of months, for at least two or three days at a time, clocking up thousands of air miles to do so, because my home is London and Bella lives in California.

Like a holiday romance, our great female friendship is one that probably should have fizzled out, given she lives on another continent, we have full-on careers, and families we love spending time with. It helps that we are both authors. That we can leave our kids with our husbands, and go and hang out in the Cotswolds or Miami on writers' retreats that morph into road-trips where we laugh so hard that we can’t even breathe.

But really it works because we want it to work. Because we value our friendship so much that we make the time and spend the money to keep it going (I know there’s Skype, Facebook, Twitter and a zillion other online ways to keep people connected, but who’s ever had an epiphany about your life over Instagram? Whereas we once had a dozen lightbulb moments driving to Hidcote Gardens one sun-drenched spring afternoon).

In doing so, it’s made me realise how I have neglected spending quality time with other great mates, but also made me question whether I really want to keep some friendships going. If someone is so busy that they can only give you a coffee slot in six weeks’ time, do they really want to see you? And in turn, you them. I didn’t think I needed any more friends in my 40s. My diary was bulging and I couldn’t see all the pals I already had as often as I wanted. But sometimes in middle age, especially in middle age, there is room for one more, particularly when that person is the rarest of finds; the wise-counsel, the fixer, the cheerleader, the comedian, the rebel, the one-woman girl-squad you only meet a handful of times in a lifetime. And when you meet that person, as I did with Bella, you hold on as tightly as you can.

Tasmina Perry is a best-selling author whose latest novel, Friend of the Family, is out now.