A chocolatier’s guide to York 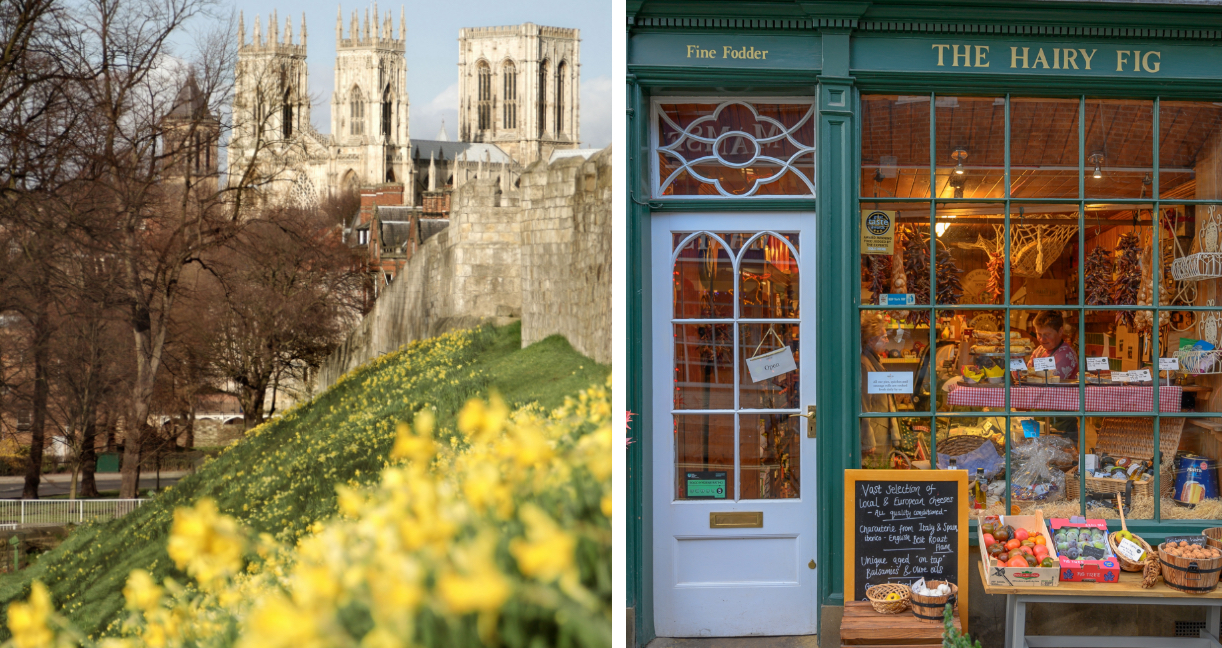 “It’s not a myth – it still smells like chocolate!” says Sophie Jewett. “There used to be a Twitter account that charted where you could get the best aroma in the city.”

Known fondly as the city of chocolate, York has a sweet heritage stacked with big names like Terry’s, Rowntree and Nestle – who all once housed their factories within its Roman walls. But where chocolate is York’s heart, independent shops are its capillaries; cobbled streets crammed with wooden-beamed businesses selling candles, homewares, teas and locally produced food. It is, in short, the perfect marriage of history, shopping and chocolate – and nobody knows it quite like Sophie Jewett.

The owner of York Cocoa House and its attached chocolate factory, Sophie moved to York from the Isle of Wight 20 years ago, attracted by the city’s vibrant Viking heritage and cocoa-scented breezes. But it was clear to her that something was missing.

“People kept saying to me ‘why aren’t we doing anything with chocolate in York?’ There were all these amazing buildings in the city that had a historic connection to chocolate, but I arrived at a time when they had started to close all the factories down.”

So, she decided to sculpt her own space in the city’s chocolate history. Her first shop, York Cocoa House, opened in 2011, and a chocolate factory, York Cocoa Works, joined it seven years later. She's committed to making the chocolate industry as transparent as possible – from choosing ethical suppliers to the factory’s thin glass walls separating customer from chocolatier.

“I was just a passionate chocolate lover who wanted the chocolate I buy to be better,” she explains.

The recent lockdown also allowed her to deepen her relationship with the other love of her life: York itself.

“I find the whole city fills me with inspiration”, she says. “It’s been a grounding presence during the chaos that the world has been through in the last year. York’s visible history reminds me that there’s been so much that’s gone before us and that it’s going to be okay in the end.”

So, who better than to give us a tour of the city’s chocolatey – and more savoury – highlights? Here, Sophie shares some of her favourite spots in York to inspire your next visit. 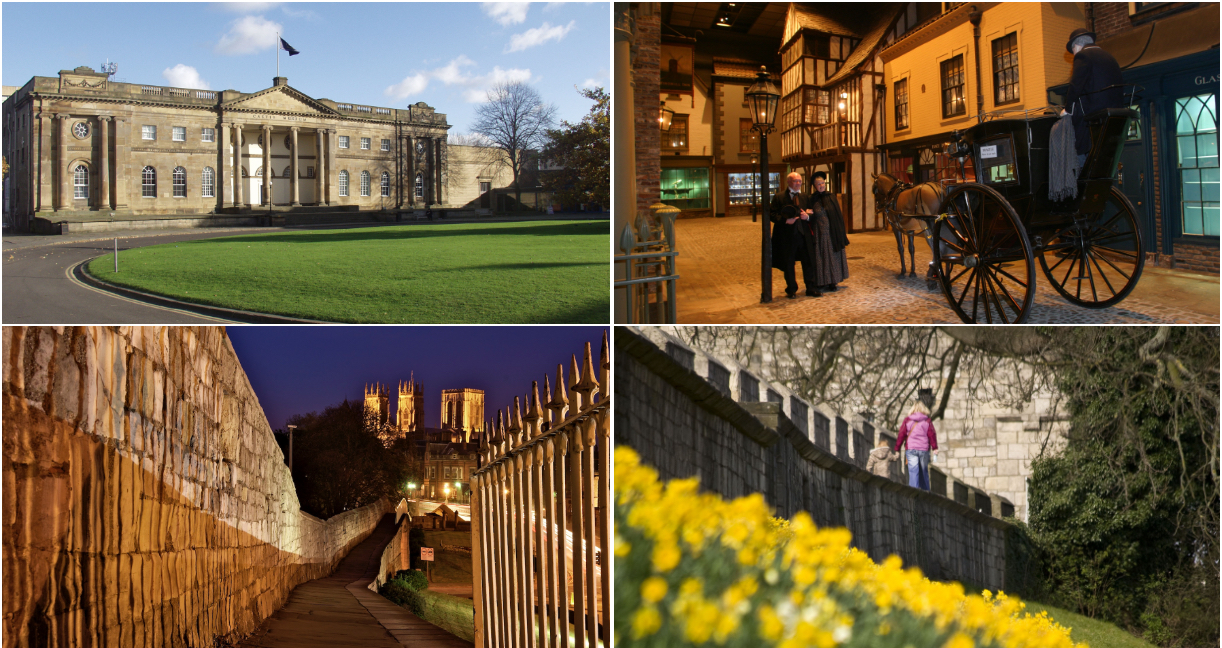 “Castle Museum is one of my favourite places. They have a Victorian-style street with a replica of an old Terry’s sweet shop – I love seeing where these old sweets came from in their original context”.

“The City Walls – if you walk the bit behind the Minster, you get a beautiful view of these enormous gardens that are only visible from this part of the walls. It’s amazing to see a snapshot of the mechanics of the city that has been here for thousands of years”.

“Fairfax House is one of my favourite places, and a good one if you’ve been watching Bridgerton. Joseph Bell was one of the pioneers of the confectionary industry and he trained in York in the 1760s when the world was all big wigs and amazing dresses. The house gives an insight into the world of confectionary when York had more confectioners than anywhere else in the country.”

Also try: York’s Chocolate Story (“they offer a great tour and insight into how the chocolate industry developed in York”) and The Edible Garden (“a wonderful herb garden behind the Yorkshire Museum with lots of little paths through it that nobody ever really goes in). 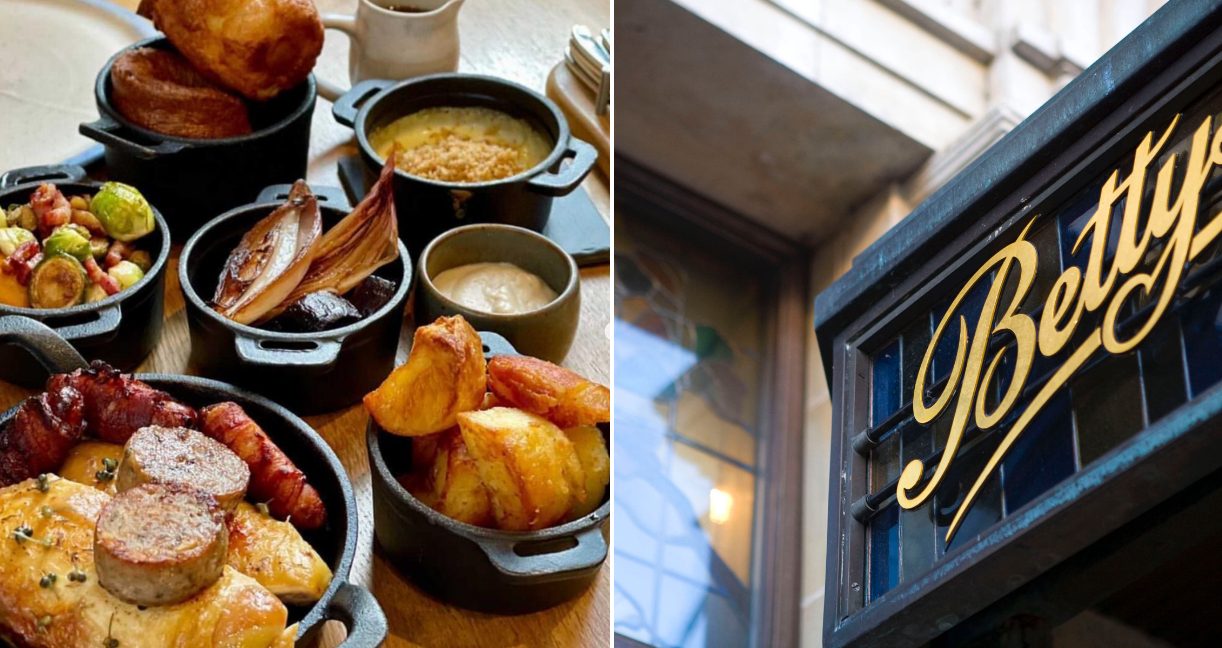 “Betty’s is always a go-to. My favourite thing to order is the fondant fancy because it doesn’t actually have any chocolate in it, but they also do an amazing chocolate orange fat rascal.”

“Roots opened in 2018 has just got the city’s first Michelin star. They actually use our chocolate in a dark chocolate and duck sauce! One dish that really sticks in my mind is their artichoke Madeline – puzzlingly sweet yet salty and cakey all at once.”

“Dog’s Nose Taqueria is one of my favourite spots in York’s container village called Spark, which has lots of street food and small businesse­s. They serve squashed plantain served with sofrito (a tomato sauce) that’s amazing”.

Also try: The Chopping Block on Walmgate (“their roast beef and Yorkshire pudding is amazing”) and The Rattle Owl on Mickelgate (“the most phenomenal white chocolate ice cream”). 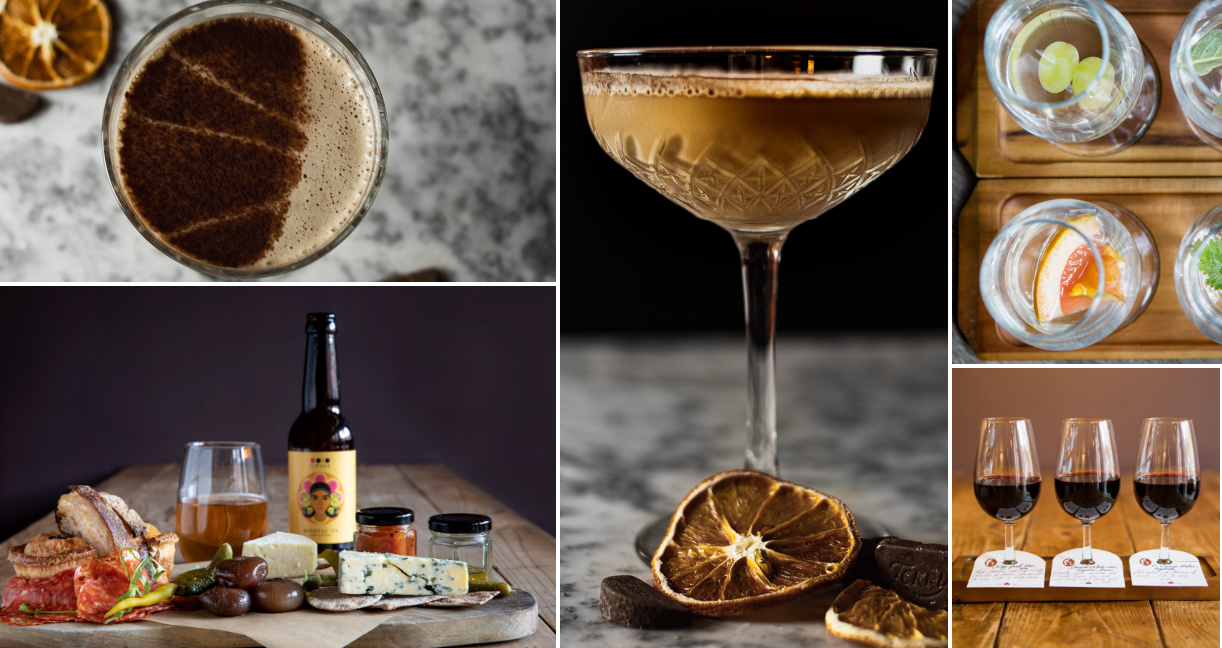 “Micklegate Social is a quirky bar with great vibes, great coffee, a great cocktail menu and it transforms into a cool wine bar at night”.

“Pairings is a restaurant and wine bar with the most amazing flavours and cheeses.”

Where to have a coffee break 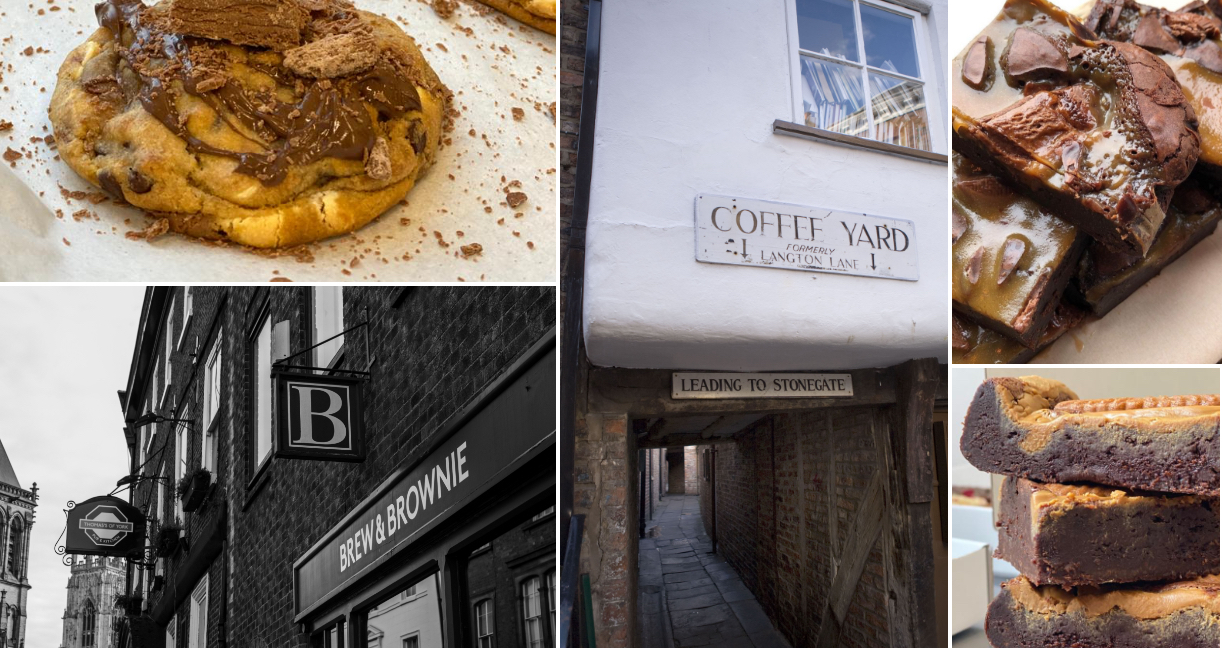 “Little Arras opened at the beginning of the last lockdown. The queues outside on a weekend are insane. They make this amazing monkey bread – melted chocolate, caramel and bread dough. It’s seriously addictive.”

“Brew & Brownie do the most amazing brownies. It’s so popular that getting a seat in there is pretty impossible.”

Also try: Flori Bakery on Walmgate and Bluebird Bakery on The Shambles. 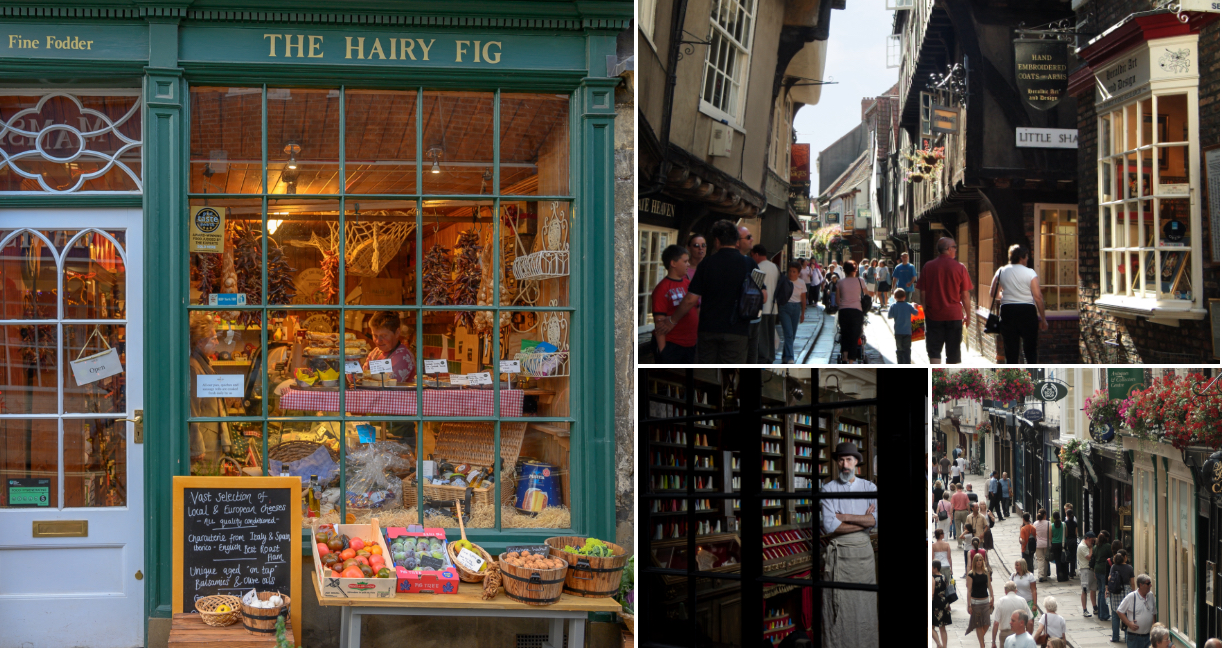 “York Cocoa House – of course! I always recommend people to try our hot chocolate because we spent years perfecting the recipe. Our salted caramel chocolate cake is also a bestseller – it’s something people travel a long way to try”.

“The Hairy Fig is a deli with lots of big tea chests that remind me of what is might have been like shopping for your groceries several hundred years ago. They’ve also got an amazing array of liquorice.”

“A really lovely tea shop on the Shambles is the Hebden Tea Company. It has the most wonderful array of teas from around the world – I love one made with olive leaves and passion fruit.”

“The York Ghost Merchants. Owner Angus has been a massive pioneer for design in the city – his work actually inspired a lot of our packaging. It’s a lovely place selling tiny ghost ornaments. It's a little bit different and gives people an opportunity to take a unique piece of York away with them”.