A paddleboarder's guide to Norwich

@georginapaddles of Norfolk Paddle Boards reveals where to eat, stay and shop in Norfolk’s capital

“I love this shot,” says Georgina McLaren, holding up a photo of six grinning paddleboarders cruising under a bridge. “That’s Bishop’s Gate in the background, which is actually where Queen Elizabeth I would have crossed when she first came to Norwich!”

For a city known for its creativity and independent shopping scene – ok, and for Alan Partridge – it’s actually water that’s fundamental to Norwich’s laidback way of life. First to arrive: the Anglo Saxons, drawn in by the River Wensum and its potential as a trade route. However, over the next few hundred years, the river’s lack of tidal power soon meant that Norwich was outpaced by the North’s coal-fired mills during the industrial revolution – a blessing in disguise, as it means that most of its original medieval buildings remain intact.

And another benefit to these calm waters? They’re great for seeing the city by paddleboard – as Georgina knows best.

“Paddleboarding allows you to see the city from a completely different perspective,” she says. “It’s so good for your mind and soul.”

Born and raised in Norfolk, Georgina discovered her penchant for paddleboarding while studying at Bristol University, but it was when she returned to Norwich during 2020’s lockdown that she pivoted from a job in marketing to become a full-time paddleboarding instructor – which she describes as “the best decision I ever made”. She joined owner Lee (who started Norfolk Paddle Boards mid-lockdown as a way to reconnect with the city and community) in swapping a 9-5 for life on the river and what she describes as a “very special community.” She thinks there’s no better way to connect with Norwich’s vibrant heritage – the highlights of which she often points out to her groups of budding paddleboarders.

“It’s such a fantastic medieval city,” she says. “As I’m paddling the same bits of water, I’m getting to know the city and its history really well – as well as feeling much more connected to nature.”

So, who better to give us a tour of the city’s highlights? Oars at the ready: here, Georgina shares some of her favourite spots in Norwich.

Norwich Cathedral – “Norwich has got two massive cathedrals. The Catholic one is spectacular, and they’ve actually got Dippy the dinosaur from the Natural History Museum on display there until the end of October.”

Plantation Gardens – “A hidden Victorian garden which is always a calm spot. It’s a little bit out of the city behind the Roman Catholic Cathedral on Earlham Road, and it’s never that busy so it’s a really tranquil place.”

Norwich Arts Centre – “Norwich has a banging live music scene, and the Arts Centre is an amazing venue. We’ve also got The Bicycle Shop Cafe which is a really cool restaurant and bar, and they’ve got a stage at the back where they host gigs and open-mic nights.”

Norfolk Paddle Boards – “The best way to see the city! There’s genuinely something for everyone. We’ve had a lot of tourists come for lessons and rentals while they’re on holiday, and it’s a great way for them to explore.” 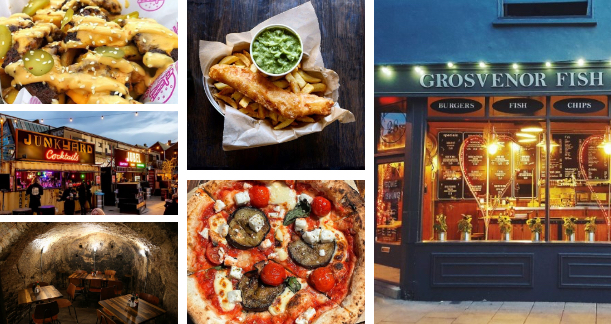 Junkyard – “A big pop-up outdoor food market that came about in Covid. It’s been super popular this year. They’ve got loads of amazing vendors. I like Sally’s Brownies the best (she does the most amazing filled brownies) and Bucket List, who do buckets of loaded chips with lots of different toppings.”

Grosvenor Fish Bar – “We’re by the seaside, so we love our fish and chips around here! Theirs are the best.”

Red Lion Pub – I’ve had the entire menu about four times, and my favourite is the duo of duck – although they do really good sharing boards as well”

Waffle House – “You name it, they’ll stick it on a waffle. They’ve got bolognese on a waffle, mushroom stroganoff on a waffle… It’s actually really good!”

The Lanes – “This is where all the independent stores are. It’s all pedestrianised and has some lovely shops. If I ever need to buy a present, I head straight for Lisa Angel in The Lanes.”

Jarrold – “The Selfridges of Norfolk. If you ever need anything, you can get it here.”

Where to get coffee 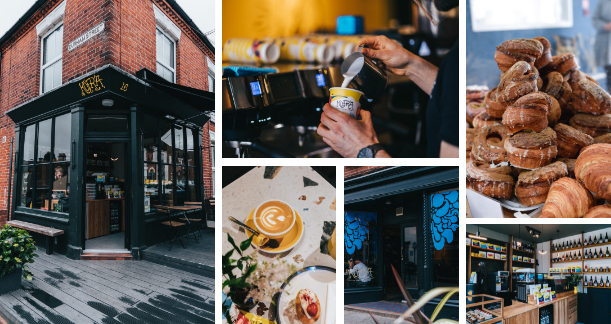 Bread Source – “Where I have all my meetings now! They’re an artisan bakery and do an amazing raspberry and pistachio swirl. They’re only in Norwich but they’ve now got five locations across the city.”

“Another fantastic coffee shop and deli is Kofra, and Cafe No. 33 do the best cake ever. I’m a carrot cake lover and they do an amazing one – the icing is next level.”

Mr Postles Apothecary – “They do a great bottomless brunch! And there’s a really good cocktail list, too.”

Rooftop Gardens – “Norwich doesn’t have skyscrapers, so this is a cocktail bar on top of an office block. You can see the whole city and the cathedral spires from up there; the architecture is all super gorgeous”