It may be better known for its islands and beaches, but Greece is a hiker’s dream at this time of year. Adventurer Gareth Clark picks five of the best hikes. 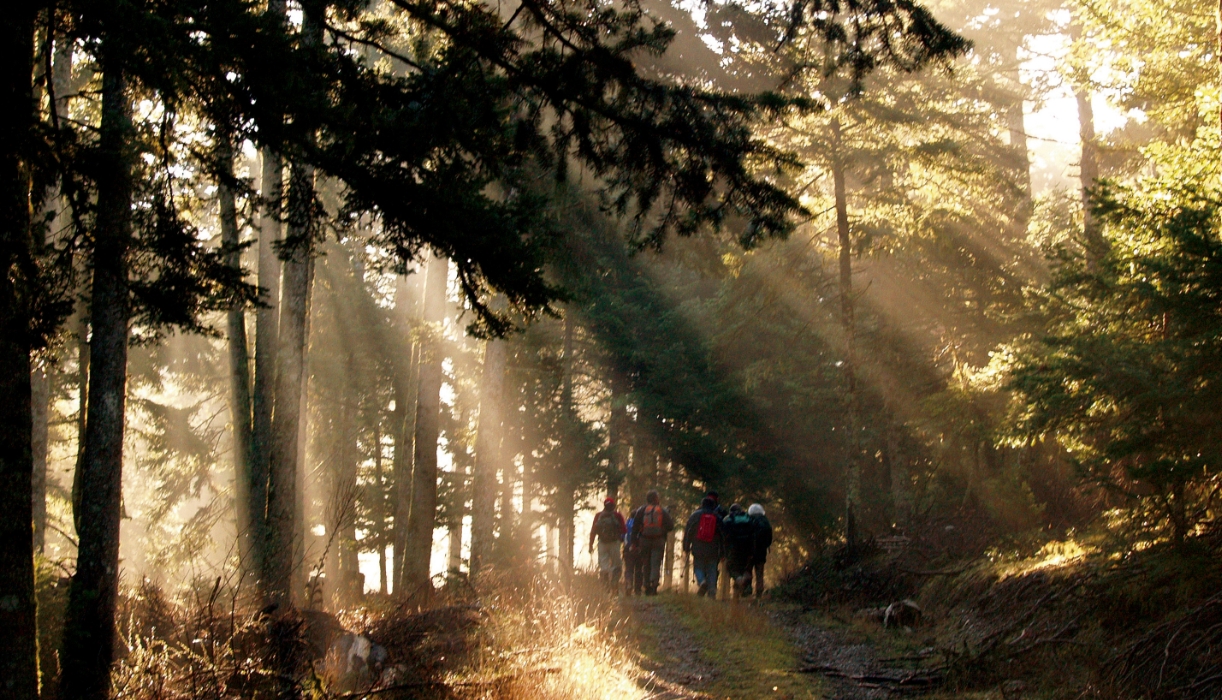 The peak of summer is usually a little hot for walking, even up in the mountains, making the months either side of July and August best for longer treks. But for those who want to experience Greece on its own terms – wild, rocky and filled with history – there’s no better way…

The Mani Peninsula is where feuding clans sculpted a landscape of castle-like houses and hidden hillside villages almost invisible to passersby. Its far north (Exo Mani) in particular is a luscious green, and it’s here the pretty town of Kardamyli skims the coast beneath the foothills of Mount Taygetos.

On the outskirts of its ‘old town’ cobbles, hikers make for the pale, stony riverbed of the Vyros, which runs dry from early summer until mid-autumn. This scrambles between steep-sided hills, yielding forested side trails to Byzantine monasteries scrawled in chipped frescoes.

On the return route, rise out of the gorge around Exo Chori and then take the old Roman road (via Agia Sofia) back. This once ran all the way to Sparta and delivers you at the foot of Kardamyli’s old clan fort, an imposing relic from another era.

Tip: Those preferring to summit Mount Taygetos instead will need an early start and a guide. Hikes run by 2407m set off at 5.30am to avoid exposed slopes in the hot afternoon sun.

Greece’s longest marked trail threads a bracing route through the mountainous region of Arcadia, in the central Peloponnese, as you overnight in stone-built hill villages and traverse endless forests of oak and spruce.

The full trail takes five-to-eight days, but those wanting a shorter hike should make for the 12.5km Stemnitsa-to-Dimitsana section. This steep forested descent into Lousios Gorge takes about five hours and is marked by detours to a pair of spectacular hanging monasteries carved into the rock face.

First up is the 10th-century Old Philosophos site, which once doubled as a ‘secret school’ during the Ottoman occupation but is now just ruins clinging tenuously to the cliff face. Further on, the whitewashed Prodromos is still a working monastery, meaning visitors must cover up with the gowns provided upon entering. Cups of sweet tea and fine balcony views are a fair reward.

Tip: The trail is extremely well marked, but if you go to the Open-Air Water Power Museum of Dimitsana you can purchase a detailed map for €7.

In ancient times, travellers to the Oracle at Delphi would dock in Kirra before clambering the slopes of Mount Parnassus to the ancient sanctuary. Today, this old pilgrim route is just a tiny part of the 900km E4 trail and best hiked downhill, so you can take in Delphi’s ruins without being too jelly-legged.

The walk takes four hours, as you tumble the hillside down to the Crissean plain, a sea of Amfissa olive trees that sprawl 55,000 acres to form the largest collection of groves in Greece. En route you’ll pass the town of Chrissou (Krisa), an ancient staging post for pilgrims, before hitting the coast. But little compares with Delphi’s relics, backed by steep views to the plains below.

Tip: Another pilgrim route trickles up from Delphi to the Corycean Caves above (8km one way), high in Parnassus National Park, where followers of the god Pan once celebrated their holy rites.

The Pelion Peninsula arcs into the Pagasetic Gulf like a beckoning finger. Its southern reaches in particular are filled with 18th-century mule tracks known as kalderimi, which have been well maintained and plunge you into a forested heartland of waterfalls, walnut groves and hidden chapels.

Starting on the coast in Kato Gatzea, hikers rise into the hills, trekking from village to village, before dropping back down to the Aegean coast in Platania. One of the more unusual sections is Millies, where a century-old 60cm-gauge railway winds its way along stone bridges to Ano Lekhonia for a fine detour.

Tip: The peninsula is packed with excellent day hikes. A rewarding trek between Veneto and Makrynitsa (26km) finishes at a town known as ‘Pelion’s balcony’ for its sweeping views over the coast.

This gorge is no hidden gem. From the moment Samaria National Park opens its trail to visitors (typically May-Oct), walkers descend in their droves. But stepping into the gargantuan maw of Europe’s second-largest canyon is no less thrilling for it.

The trailhead starts at Xyloskalo before descending to the white-pebbled riverbed below and its steep contoured walls. The final stretch culminates at the spectacular ‘Iron Gates’, a narrow sleeve of 300m-high cliffs that funnel walkers out through a four-metre-wide passageway.

After five hours of hiking, you’ll arrive in Agia Roueli, which is entirely cut off by road. Taking the ferry or walking is the only way out, with the former making a wonderfully serene exit as you pull away from the rocky coast.

Tip: If you plan on dodging the bulk of the morning crowds and starting after midday, bring an overnight bag because the last ferry from Agia Roueli tends to leave around 5:30pm. Also, take plenty of water.