Where to ice skate in Europe

From Paris to Berlin, here's where to get your skate on this winter

Glide. Thunk. Muttered comment about them ‘making it look SO easy on Dancing on Ice’. Repeat.

Turns out, ice skating isn’t quite as easy as popular culture would have it. Still, that doesn’t stop us from quite literally hitting the ice every year, filled with romantic ambitions of perfecting our pirouettes/gliding hand in hand with our partners/out skating all the kids (or all of the above).

And while there are loads of gorgeous ice rinks returning to the UK this year, we’re also setting our sights (and skates) further afield – to European cities that are at their best in the winter. So, we’ve put together a list of the ice rinks we can’t wait to fall over skate on this year – from an icy Parisian palace to a frozen Swiss lake.

Even the least graceful of skaters exudes elegance when in Paris. The ice rink at Le Grand Palais, smack bang in the middle of the Champs-Élysées, is an impressive set up whenever you visit. By day, the wintry sunlight falls through the domed, glass ceiling; by night, the 3000m² rink turns into a dancefloor, complete with disco lights and tunes loud enough to conceal the sound of you crashing into the barrier for the fifth time…* 3 Av. du Général Eisenhower, 75008 Paris, France 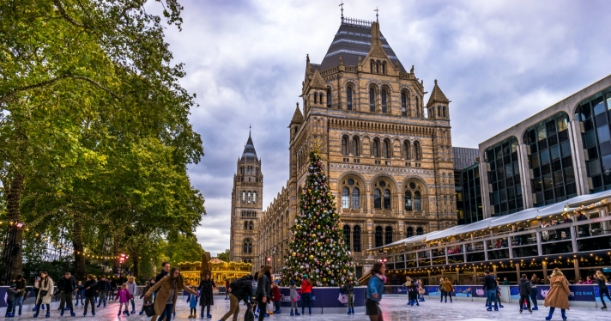 Open-air skating in London is always a magical affair, with rinks everywhere from the Tower of London to the top floor of a vibey east London car park. This year, however, we’re directing your attentions to the Natural History Museum. As well as being a scene straight off a Christmas card, 2021 is the last ever year you can skate here as they’re replacing the space outside the museum with a hub for urban wildlife. Get your tickets while you can. Cromwell Rd, South Kensington, London SW7 5BD 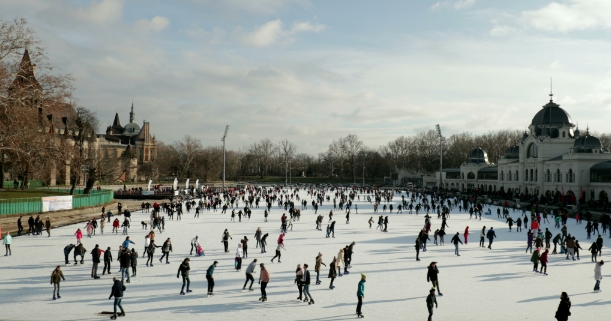 You get a double whammy of views from the ice in Budapest: on one side, the bronze statues of Heroes Square, on the other, the turrets of Vajahunyad Castle. The City Park rink is also one of Europe’s oldest – as well as one of its largest. There are just over 12 kilometres of ice available, and if you time your visit right, you might catch locals ballroom dancing to a live pianist – all happening from the ice. Budapest, Olof Palme stny. 5, 1146 Hungary 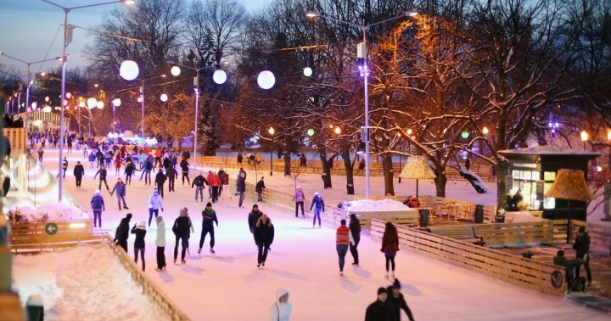 Hear us out: a park run, but instead of lacing up your trainers, you strap on skates instead. That’s what’s on offer in Moscow, anyway. Every winter, the paths in Gorky Park are frozen, crisscrossing the snowy landscape and attracting tribes of skaters and skiers. They’ve also done a great job on the lighting, with glittering trees lining the tracks and LEDs embedded beneath the ice that light the path in different colours. Magical stuff. Moscow Krymsky Val, 9, Russia 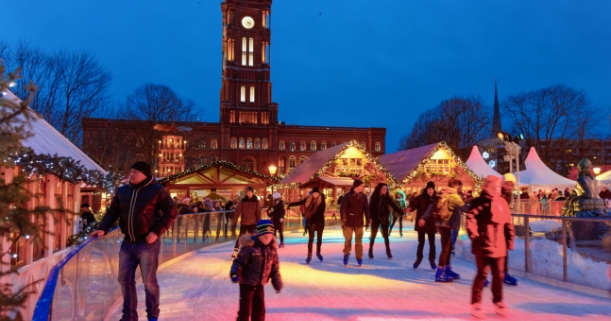 The only better way to soak up Berlin’s Christmas markets is from the ice. Potsdamer Platz is one of the more festive of Berlin’s cabin-lined squares, with twinkling huts selling everything from sculptures to sausages, and a Ferris wheel glittering over the circular rink. Skating complete, follow your nose to a mug of something warm and spiced (either glühwein or eggnog will do) and an onion-topped Bratwurst – you’ve earnt it. Potsdamer Platz, 10785 Berlin, Germany

Skiing aside, Switzerland also comes in strong on the skating side of things. Lac de Joux – a huge, mountain-edged lake in the Jura Mountains – is top of our lists. The scenery is alpine beauty at its finest: sugary mountains speckled with fir trees crumble down to a marzipan-like frozen lake, which is completely free to skate on. Don’t forget your thermals – temperatures plummet to -11˚C here in peak winter. Lac de Joux, Switzerland

*CORRECTION: Le Grand Palais will no longer open to the public until 2024