All Hail, Queen of the Disco

Enigmatic, soulful and a whole lot of fun, Crazy P (formerly known as Crazy Penis – yes, really) have been shaking Britain’s dancefloors, festivals and clubs for over 20 years. Danielle Moore joined the band in the late Nineties, when she’d honed her DJing skills playing after-parties at her shared house in Manchester: “I’d already started to collect vinyl so I’d get on the decks when we got back. I suppose some would call it entertainment, some would call it torture,” she laughs. “When I’m on stage, it’s like I switch into this character. She’s vulnerable, volatile, completely spontaneous, loud, excitable and sensual. She’s in touch with the way she’s feeling – very in the moment. Sometimes I can feel really average, nervous and not particularly at my best, but by the time I’ve gone on stage, I’m absolutely tingling.” This is Danielle Moore describing her on-stage persona. And if you’ve ever been to one of their gigs, you’ll know exactly what she’s  on about.

Fast forward to 2019, and the band have a discography bigger than Elton John’s wig collection, along with three albums that have taken them on tours all over the world, describing their music as “fusing slinky underground disco, deep electronic throbs and shimmering pop moments – this is dance music with a voice, a heart and soul.”

And the lead vocalist, Danielle, with her unapologetically retro style, brings more disco and soul to the table than an entire series of Soul Train, especially when it comes to her wardrobe – think 70s-inspired jumpsuits, clashing prints and all the florals, which she says make up an integral part of her on-stage persona. “You have to step on stage looking as brilliant as you can. That’s what makes me feel like I’m ready to engage in something inspiring and fresh. It gives me a back-up, a strength. It’s not all about how we look, but it’s certainly a performance.”

And Danielle’s love for a vintage vibe isn’t restricted to Crazy P’s live performances. “I feel more comfortable in 70’s style. I don’t know whether that’s because I was born in ‘71 so it’s conditioned into my subconscious, but when I first joined the band, bearing in mind I was approaching 30, I found this real change in my personality when I dressed up. I’d always go to secondhand shops and buy flares or retro-style dresses. I had a new relationship with clothes. 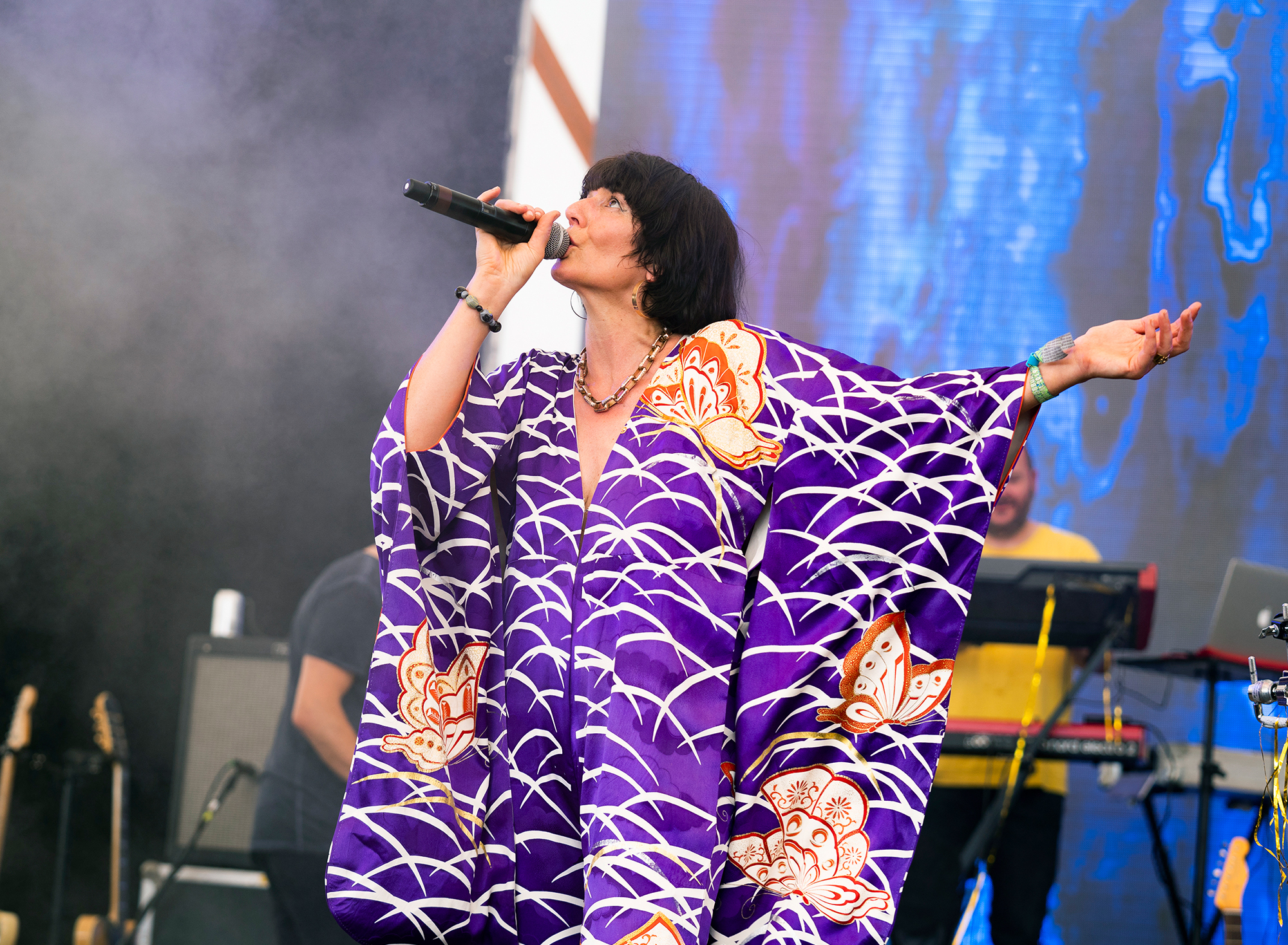 Even now, I just love going into charity shops and flicking through all the vintage sections. It makes me feel really special.” But underneath it all, for Danielle, being the queen of the disco is about something bigger; taking people away from their everyday lives and allowing them to let go of their inhibitions. “Disco has always been something that has brought people together, and dancing to the rhythm and the positive cause, you can release yourself. Even if it’s just momentarily forgetting about the humdrum of everything that’s going on – it’s a real necessity.”

“With disco, it doesn’t just inspire us musically. It’s the fashion, and the reason for it being there – it’s a shout out against exclusion and division; against being a minority. We’re influenced by people like Donna Summer, Prince and Grace Jones. All the soulful singers. It’s that passionate disco sound that was speaking culturally at the time – which is something I think appeals to a lot of people these days.”

“I want people to feel good. Really bloody good,” says Danielle. “Music can be something that’s in the background, it can be there as a companion, or it can be there as something that inspires you to do something, to take action, to dance or to energise you.” It’s this give and take between the audience and the band on stage that makes Crazy P’s performances so electrifying. “It’s like a cyclone of power, where you’re getting from the audience what you’re giving to them. There’s this mad energy – it’s almost like being on some kind of higher plateau, you’re completely carried away with the moment. You can see in their faces that they’re hanging on your every move, but you’re also hanging on theirs – they just don’t know that.”

When Danielle first met original band members, Jim, Tim and Toddy she had no idea they would become so successful. “I remember Tim bringing his records round once when we were having a party and he said I was the only one in the room dancing. He said that was what first attracted him to me. They asked me if I sang – they’d heard me doing Shirley Bassey impressions, so thought maybe I could! – I’d not really sung before, so I was taking a big leap of faith in myself. It weirdly worked.”

So what’s next for the band bringing disco and soul to Britain’s dancefloors? “We’ve got an America tour in a couple of weeks. Then various UK dates in London, Bristol, Birmingham, Manchester. Then we’ve got Amsterdam and Georgia. Throughout that period, we’ll be DJ-ing in various UK cities and it just seems to carry on. After that, we’ll hopefully get back in the studio to do some more writing. We’re just really grateful for the fact we’re still here.”