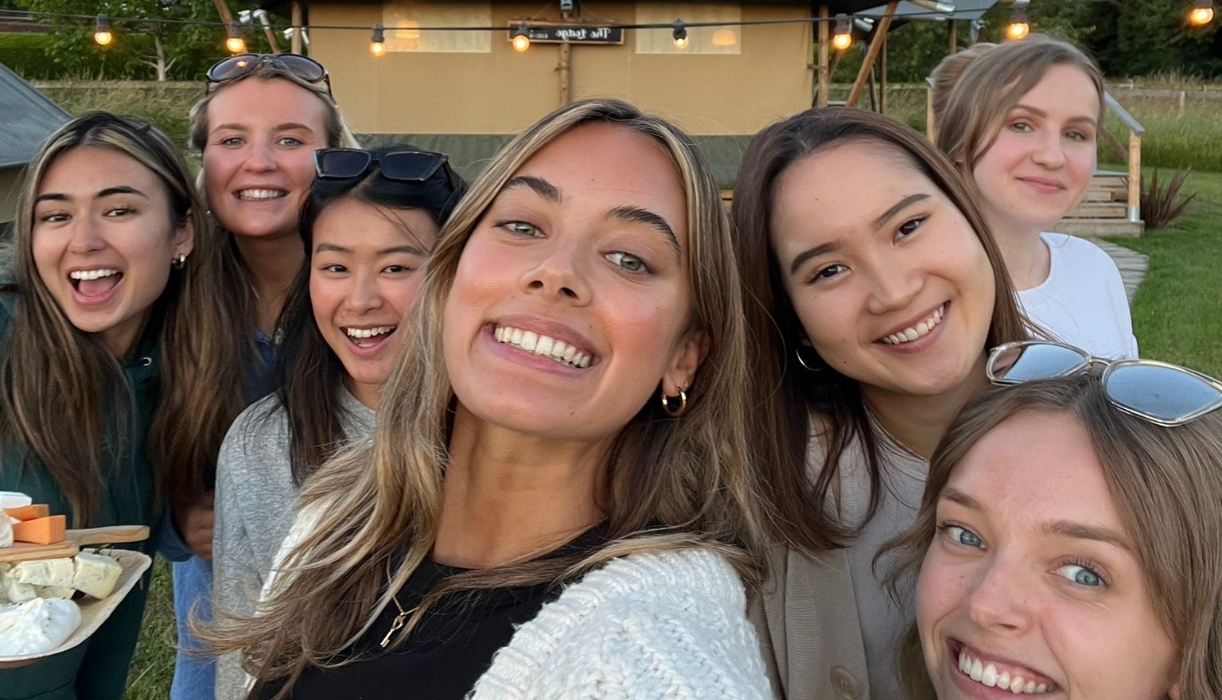 When was the last time you made a new friend? When you started a new job? On the first day of school many moons ago? Maybe it was the first time you exchanged lip gloss in the pub loos with a stranger. As adults, we often think that forging new friendships is exclusive to these ‘firsts’. Or, that there must be something wrong if you’ve reached a certain age and don’t quite have it all figured out. At least that’s what founder of The Bamby Collective Ambar Driscoll believes.

The 24-year-old model and content creator wants to dispel the myth that making new connections and forming friendship groups has a deadline for women in their 20s. So, she’s squashing the norms of friendship-making with her online, all-female community The Bamby Collective, who have over 20,000 members across the UK and provide a platform for like-minded young women to seek advice, share stories, and – most importantly – forge new friendships.

Ambar has been growing her online community since 2020 and defines the Collective as “a safe space for young women to make friends and connect with other young women online and offline.” The uplifting group, living on Facebook, Instagram and now TikTok, meet monthly and between group gatherings “post uplifting content, positive educational stuff and general chit-chat about anything and everything” on the platform, says Ambar.

"I wanted to create a safe space for young women to make friends and connect with other young women online and offline."

So, yes. Think the ladies’ bathroom (with less gin and more long-lasting connections), plus a whole host of joyous conversations and agony-aunt-esque advice. From sharing easy workout routines, housing advice and travel recommendations to mental health and relationship support, it’s the kind of nothing-off-limits space we all crave from our female friendships.

And that’s something founder Ambar was keen to keep at the heart of the Collective from the outset. “I think growing up we sometimes put female friendships on the back burner,” she says, “or at least not nurture them as much as we should, because we get distracted by things we think are more exciting.” A sentiment that hits home with Bamby’s audience, which grew considerably this summer.

“There was definitely a need out there for something like Bamby,” says Ambar. “As soon as I decided to post a TikTok on Bamby’s page talking about what we do, it went crazy.” After her first TikTok received 200,000 views overnight, Ambar saw the Collective’s Facebook group membership requests double.

“I had to really quickly capitalise on it, so I made local groups all across the UK and found ambassadors in each area who were happy to liaise with me, so they could organise the events locally.” The group now works on a national level, with local collectives meeting monthly, led by their area ambassadors. Ambar also arranges gatherings for the whole Collective, which range from picnics in the park to axe throwing parties and bring together a mix of women who all have the same goal – finding friendship.

“As soon as I decided to post a TikTok on Bamby’s page talking about what we do, it went crazy.”

Talking about what makes Bamby different from other friendship quests, Ambar says, “It’s a very wholesome way of making friends. It’s different to going on a night out or intensely meeting one on one with things like Bumble BFF.” She believes that being upfront in what you want from a friendship may be the secret to finding it.

Ambar proudly admits Bamby’s monthly meet-ups are her favourite part of the job, which is no surprise. They’ve played an integral role in the Collective’s growth. Starting in lockdown, after the pandemic put a stop to their first planned meet in March 2020, Ambar set her sights on virtual growth. She says there were a lot of Zoom quizzes, Netflix parties and group chats, but the community spirit that was so important back then still holds the group together now.

She says, “Lockdown was probably our biggest challenge, but it also gave us an opportunity to learn what Bamby could really achieve. People were connecting more than ever.”

Bamby’s meet-ups look a little different now. In April, the group went international, hosting a meetup in South Africa, and over the summer they hosted several park picnics and workshops for hundreds of members. Most recently, the Collective took a trip away together for the first time – escaping on a wellness retreat to the Hartford countryside, which Ambar says was their most ambitious adventure yet.

She adds, “It’s a daunting thing to do – it’s scary. You’re putting yourself out there, but once you’re there, there’s no pressure. You can go and chat to people in groups or individually and if you’re not feeling it, that’s fine too.” Seeing real friendships flourish and grow has steered Ambar’s ambition over the last year. She says, “It’s heartwarming when you see regular faces come again, and again, and again!” Laughing, she says she sometimes follows Bamby members on Instagram and sees that whole friendship groups have been created off the back of meet-ups.

The Collective are currently running a penpal initiative, connecting women and non-binary individuals across the world, have meet ups planned monthly for the foreseeable and want to grow the Collective internationally, with more escape trips on the horizon.

Despite things moving fast, there’s one founding pillar that keeps Ambar, and the Collective, grounded – prioritising a supportive attitude and honesty above all else, and friendship, of course. To quote Ambar, quoting Dolly Alderton, ‘It’s all about finding that kind of love that may not kiss you in the rain, but will listen and laugh, and help you learn.’ Or something like that…