Your cookies are disabled. To experience the full world of Hush, please enable these or check whether another program is blocking them. By enabling them, you are agreeing to our Cookie Policy
This website uses cookies. You can have a look at our Cookie Policy for information about what they are, why we use them and how to manage them. By continuing, you’re agreeing to accept them…
It looks like you're visiting from country. Please click here to select your country, then shop directly from that site - you won't be able to checkout whilst visiting the UK site.

How to make the perfect lamington

Pillow-like clouds of soft vanilla sponge. A slash of strawberry jam. Glistening coconut-topped chocolate icing. Lamingtons certainly have our vote for The Bake of Summer – and they are surprisingly easy to make.

The bite-sized cakes are a bit like the jam and coconut traybakes we used to wolf down at school – except smothered in chocolate and given the instant ‘cool for summer’ stamp by being invented in sunny Australia. Aussies all over the world can’t get enough of them – including hush founder Mandy.

Sounds good, right? Well, here at hush, we don’t want to make just a ‘good’ cake. Oh, no. We want to make the best lamingtons – with the fluffiest sponge, the most moreish icing, and the crispiest coconut on top. And that’s where Radio Lamington comes in.

The brand is the brainchild of the team behind London restaurant group Daisy Green, who are known for their brilliant Aussie-inspired fare. When the restaurants closed during lockdown, they decided to do their bit for the community through what they do best: lamingtons. They whipped up 30,000 cakes as a part of the #FeedTheNHS campaign before opening Radio Lamington to the public. Now, you can buy beautiful boxes of lamingtons in a flurry of summery flavours (we love the Golden Gaytime, which is inspired by a nostalgic Aussie ice cream) – and the best bit? For every box of lamingtons sold, a second box is donated to NHS workers. Cake with a conscience: we love it.

Radio Lamington have been kind enough to share their recipe for a classic lamington with us, as well as some tips and flavour inspiration to take your bakes from basic to brilliant. So, fire up those mixers and grab your spatulas: here’s how to make the perfect lamington.

P.S. If don’t want to make them yourself and live in London, you can always order a box from the Radio Lamington website, and follow them on Instagram for more cake-based inspiration. 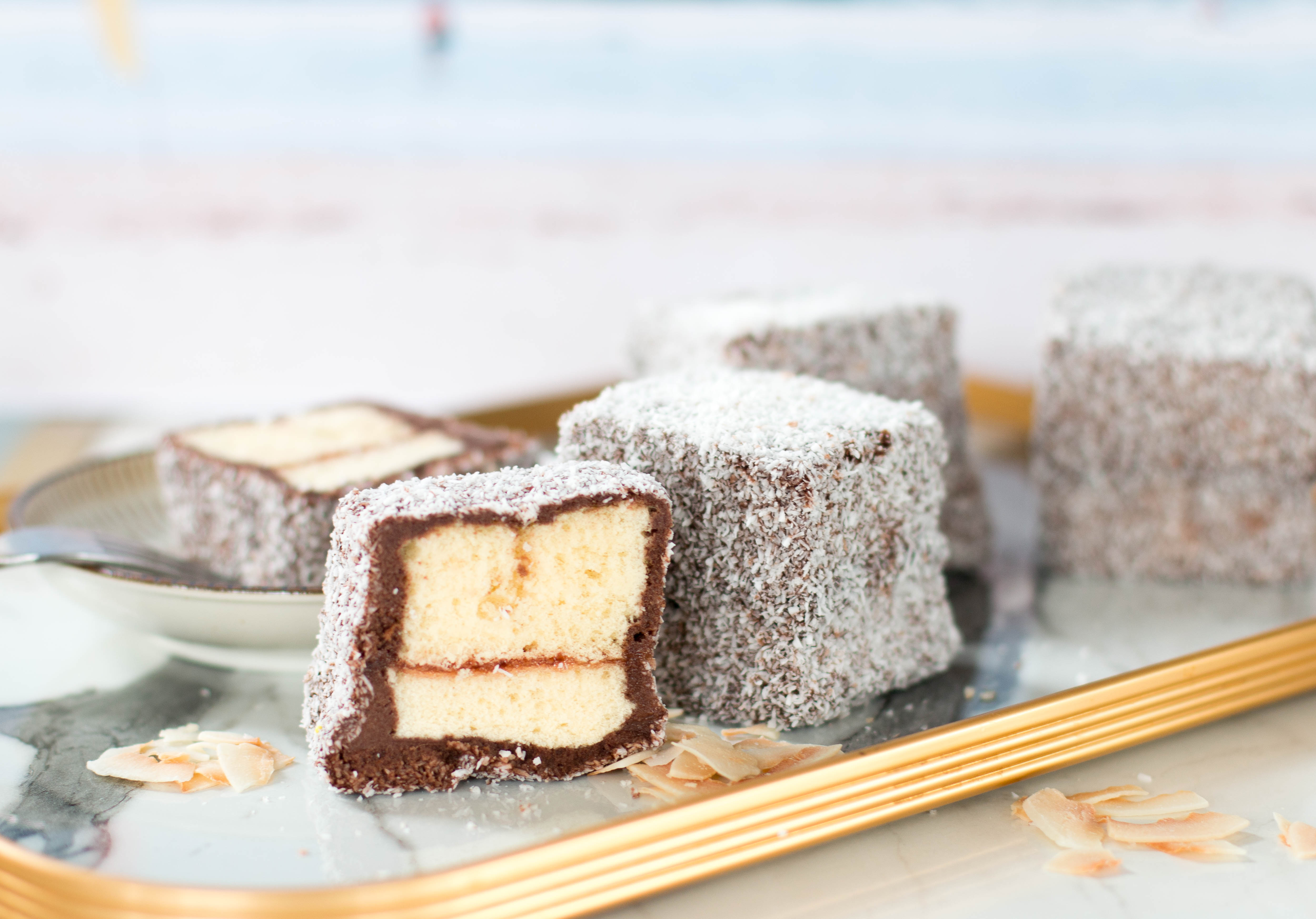 Create a tangy lemon sponge by adding the zest of two lemons to the above cake batter recipe. Combine with an orange butter cream filling and outside ganache rolled in coconut and you’ve got a citrusy combination that’ll whisk you away to long nights on the Amalfi Coast.

Whip with an electric mixer until pale and fluffy.

There may have been no Wimbledon this year, but strawberries and cream are a British summer staple regardless. Replace the jam in the original recipe with 300g of clotted cream and swap the chocolate ganache for the below strawberry glaze.

Mix all ingredients together in a bowl until smooth. Finish as per the original recipe by rolling in coconut.

Replace the jam in the original recipe with 300g of vanilla cream (below) and roll in hundreds and thousands instead of coconut for a treat fit for any fiesta.

Whip with an electric mixer until pale and fluffy. Finish as per the original recipe by rolling in coconut.